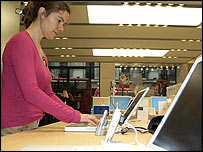 “As Apple puts the finishing touches to its new London store for Saturday’s grand opening, it appears that punters eager to lay their hands on the firm’s iconic iPod music player when the doors open could be disappointed.”

Can Europe be the Apple of Apple’s eye?

Apple has once again expanded its retail division and this time on the other side of the Atlantic. It was said that Apple eagerly waited for only the most precise location to open this retail store. Owned by the Royal Crown, though it is not discussed, Apple is sure to be in it for the long haul and make serious profits to their investment in the location they choose. “We only open stores that we know are going to be profitable,” said Mr. Johnson – Apple Senior vice President of Retail. “Here in London we’re going to make money from day one.”

However, on opening day, the store may be short of iPods as it suspects an overwhelming number of visitors for its debut. Also, and for whatever reason, Apple significantly marks up all merchandise (computers and accessories) more than in the US market. A typical iMac G5 is approximately $500 US dollars more in the UK than in the US market. Though asked, Apple avoids in depth discussion as to why this factor exists and appears to be so significantly steep.