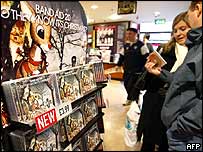 In a mission to raise awareness and money to fight hunger in Africa, Band Aid single which is available only currently through iTunes UK store or can be purchased here for US residents, sky rockets sales figures. The objective done in the past within 1989 by various musical artists joined together, is now featuring names such as Dido, Robie Williams and Chris Martin on the 2004 release.

The single sold more than 72,000 copies the first day it was released according to reports. The original version is also available for download and all proceeds go to the charity with Apple almost matching individual download figures to increase overall charity dollars.

One question is left to pose…”Do they know it’s Christmas” time?