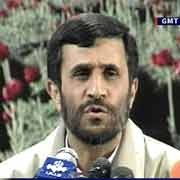 TEHRAN, Iran – Iran on Thursday promised to formally respond on Aug. 22 to a Western package of incentives aimed at resolving the standoff over its suspect nuclear program.

The council didn’t elaborate, but Iranian officials repeatedly have suggested that Tehran may withdraw from the Nuclear Nonproliferation Treaty and stop cooperation with the U.N. inspectors.

“The package of incentives requires a logical time to study it … August 22 has been set for declaring (our) views,” the council said in a statement read on state-run television.

“In case the path of confrontation is chosen instead of the path of dialogue … and Iran’s definite rights are threatened, then there will be no option for Iran but to reconsider its nuclear policies,” it added.

The statement came a day after Russia said the U.N. Security Council is in no rush to pressure Iran over its nuclear program, striking a more conciliatory tone than the United States as diplomats began discussing a resolution to put legal muscle behind demands that Tehran suspend uranium enrichment.

The United States and some of its allies accuse Iran of seeking to produce highly enriched uranium and plutonium for nuclear weapons. Tehran says its nuclear program is peaceful and aimed at generating electricity.

Offer made on June 6
The Western nations offered Iran a package of incentives on June 6 — including advanced technology and possibly even nuclear research reactors — if Tehran suspended enrichment.

But the frustrated powers agreed last week to send Tehran back to the U.N. Security Council for possible punishment, saying it had given no sign it would bargain in earnest over its nuclear ambitions.

Iran has said the incentives package was an “acceptable basis” for negotiations.