If the latest round of touchscreen iPod rumors are true, you may want to revise your holiday wish list.

Rumors about an “iPod Touch” have been circulating around the Internet for awhile now. Even MethodShop.com posted some touchscreen iPod patent pictures back in February. The new twist to this story is that the touchscreen iPod might have a wide aspect ratio screen. This would make a lot of sense since Apple recently started selling movies on iTunes.

The new widescreen rumor originated from an anonymous executive at an iPod accessories company who spoke to someone at TrustedReviews. How reliable is this anonymous executive? Your guess is as good as ours. Anyway, here’s what Mr. Anonymous had to say:

“In a very matter of fact tone I was told that the product was not designed for the current generation of device, but the official 6G iPod… which is to be released in December. His company’s device only comes onto the market shortly before then and would benefit hugely because the new iPod would sport a screen that filled the full side of the device and consequently offer higher resolution video… This is why Jobs isn’t afraid of the Zune,’ he said, though he had no knowledge of whether wireless would make an appearance.” 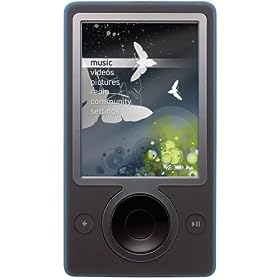 “Jobs is unimpressed with Microsoft’s Zune, which allows users to exchange songs. ‘It takes forever,’ said Jobs. ‘By the time you’ve gone through all that, the girl’s got up and left!'”

Adding more fuel to the fire, here’s what Gizmodo had to say about the widescreen iPod rumors:

“One thing’s for sure, if this widescreen iPod is released in the next two months, the Microsoft Zune with its old-fashioned 4×3 screen and crippled WiFi will be slam-dunked.”