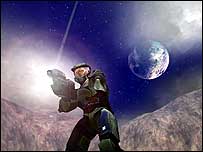 A new study showing a link between violent videogames and potentially negative behavior in teens could be ammo for federal and state lawmakers who want to regulate vidgame sales.

Study’s findings, presented Tuesday at the Radiological Society of North America’s annual convention, showed that teens who play violent vidgames experience decreased activity in areas of the brain that control inhibition while activity in emotional-arousal areas in the brain increases.

Implication is that adolescents may not be able to control themselves after getting deeply involved with a violent vidgame.