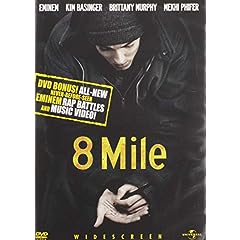 Did you miss Eminem’s hit movie “8 Mile“? You’re in luck: Many of its rap battles and other major scenes are available for viewing on YouTube, the video-sharing Web site owned by Google. Indeed, until recently, the entire film was there, broken up into 12 nine-minute chunks to get around YouTube’s ban on longer clips.

An 18-year-old YouTube user calling himself Yosickoyo posted the movie six months ago. He declined to give his real name, but said in an e-mail message that he had made the film available as a favor to others who had shared movies. “I just want to thank them by uploading a movie that I have,” he wrote.

NBC Universal, whose Universal Pictures distributed “8 Mile” in 2002, did not appreciate the gesture. The company asked YouTube to take down the clips after it learned of them from a reporter. It was not the first time. NBC Universal has three employees who troll the site every day looking for studio-owned material, and they send more than 1,000 such requests a month to YouTube.

“There is only so much we can do,” said Rick Cotton, NBC Universal’s general counsel, who estimated that more than half the videos on YouTube featuring NBC Universal’s television shows and films were unauthorized. As fast as a clip is taken down, he said, YouTube users “can always put up another.”