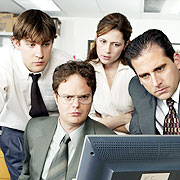 Such was the revelation ending the Jan. 18 episode of “The Office,” answering questions viewers may have had over the fate of Andy Bernard (Ed Helms) after he punched a hole in a Dunder-Mifflin wall.

But it’s a revelation seen only by viewers watching the producer’s cut of the episode online, and even days following its airing, “Office” showrunner Greg Daniels still wasn’t sure how to address the next broadcast episode (scheduled for Feb. 1).

“I haven’t locked the next episode, and we’re debating whether we need to answer the question,” Daniels said earlier this week. “It’d be the first time we said the online version is answering a question that the (on-air) viewer is curious to know about.

“I’m kind of tempted to do that because next episode is really tight also, and I want it to be the best episode for (its own sake).”

There’s no doubt that both Daniels and NBC have enjoyed the ability to air a longer version of “The Office” online, as has happened previously this season with the “Branch Closing” episode. The producer’s cut solidifies the bond between the show and its viewers, and as Daniels pointed out, “it makes it a little less painful to cut something” — especially when NBC can’t grant Daniels any extra leeway.