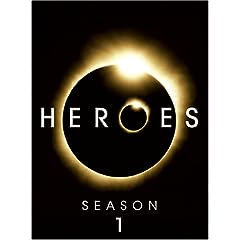 No longer are our magnificent Monday night ‘Heroes’ going to be confined to merely mortal NBC TV (and SciFi Channel reruns). Our favorite Heroes and villains are coming to DVD this August with tons of bonus features.

The 7-disc set, available on DVD and HD DVD on August 28, 2007, will include the never-before-aired 73-minute premiere episode and over 50 deleted scenes.

Here are some of the Heroes Season 1 DVD extras: