Promoting a show about people with superhero abilities is tricky. “We didn’t want to make this a niche show,” said Vince Manze, then president and creative director of the NBC Agency (now president, NBC program planning, scheduling and strategy).

The solution was to emphasize the human elements. “Not comic book, not superheroes or X-Men, but what was real,” said John Miller, chief marketing officer for NBC Universal Television Group and president of the NBC Agency. “We wanted people to ask themselves what would happen to you if you discovered you had an extraordinary ability.”

“Ordinary people with extraordinary abilities” became the focus of the entire campaign.

“We knew that the sci-fi people would be there no matter what we did,” said Mr. Manze. “We wanted to position it as a human drama with fantasy elements.”

To expose the new show to as many people as possible in advance of the debut, NBC first screened it at Comic-Con, the massive gathering of comic book and sci-fi fans. “We did that to capture the evangelist, the hard-core sci-fi person,” said Mr. Miller. “And the blogosphere took off.”

A second campaign, sponsored by Nissan, handed out 300 cards at movie theaters, redeemable for the show on iTunes. “From an advertiser standpoint, it was a great example of involvement,” said Mr. Manze. “[Nissan] went on to sponsor the premiere with limited commercial interruptions, a great experience not just for us but for the advertiser.”

Sixty fan-based Web sites popped up before the show premiered. Nielsen BuzzMetrics said it was “the most buzzed-about show” of the new season.

“We were in print, radio, cable, everywhere, with a very consistent message: Ordinary people with extraordinary abilities,” said Mr. Miller.

After the launch, the challenge was to maintain the momentum over the season. Watching the episodes in advance with his daughter, Mr. Manze had an “aha” moment during episode five, when Future Hiro appears in a subway car and says, “Save the cheerleader.” His daughter turned to him and said, “That’s awesome.”

“It was Campaigning 101,” he said. “‘Save the cheerleader, save the world’ is something you don’t hear every day. It cut through the clutter, but we didn’t make it up. It was part of the script.”

“This became the second stage, which seemed to lift ‘Heroes’ to a new level,” said Mr. Miller. “It became this phrase that everyone used, and gave us a plan, a map, about how to market the show.”

That included “Zeroes,” some faux-user-generated content highlighting ordinary people with ordinary abilities. “The end result is that it made the show a little hipper,” Mr. Miller said. The ultimate compliment? “Two promos by our rivals ‘Ugly Betty’ and ‘Family Guy’ that parodied our ‘save the cheerleader’ campaign.” 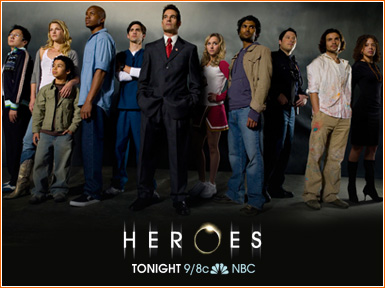