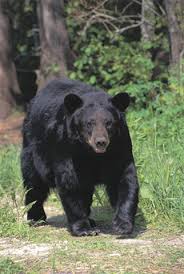 When a black bear threatened former Marine, Chris Everhart’s family, he grabbed the closest weapon he could find… a log.

Everhart and his 3 sons were camping in the Chattahoochee National Forest in northern Georgia on June 16, when a 300-pound black bear stumbled upon a cooler of food in their campsite.

Everhart’s youngest son, 6-year-old Logan, hurled a shovel at the hungry bear in an attempt to scare him away. Unfortunately it angered the bear and it started charging toward the 6-year-old. Everhart then grabbed the closest weapon he could find — a log from their stash of firewood and thew it at the bear killing it with one blow.

It happened to hit the bear in the head. I thought it just knocked it out but it actually ended up killing the bear.

Mr. Everhart was given a ticket by the Georgia Department of Natural Resources for failing to secure his campsite.