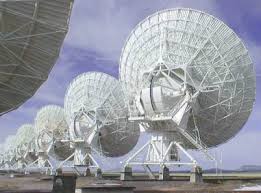 On August 15, 1977, a radio telescope at Ohio State University pointed skyward picked up an unusual signal. The telescope was searching the radio wave spectrum as part of the Search for Extraterrestrial Intelligence, or SETI, program. Four days later, a volunteer with SETI, Professor Jerry Ehman of Franklin University in Ohio, went over the printout of the day’s results and came across the readings. Seeing the unusually strong spike, Ehman circled the results and scribbled in the margins: “Wow!”

The radio spike that became known as “the Wow signal” still holds a place in the hearts of amateur astronomers, hinting as it did at the remote possibility that an alien civilization might have been sending a message. But 30 years later, the impact of the signal has faded, in large part because it has never been observed since.

“Nobody knows what it was, and we can’t verify what it was because we haven’t seen it again,” Seth Shostak, the senior astronomer at the SETI Institute, told CBC News.

All that Ehman and the astronomers who saw the results from the Big Ear Radio Observatory at Ohio State University could see was that the signal wasn’t natural. Stars and pulsars are naturally occurring producers of radio wave signals, or low-frequency waves of electromagnetic radiation, but their transmissions tend to be over broad spectrums. The Wow signal, on the other hand, was observed only on a narrow band frequency of around 1420 megahertz, the natural emission frequency of hydrogen.

The Big Ear’s data printout registered the intensity of recorded radio waves by an alphanumeric code, with ones and twos representing the smallest burps in the sky and larger signals registering as high numbers and then as letters, A through Z. That’s why when Ehman saw characters reading 6EQUJ5 — with each character representing 12 seconds — he wrote his famous “Wow!”

After 72 seconds, the signal stopped. Since a strong, intermittent signal was exactly the kind SETI researchers were looking for, professionals and amateurs alike have turned their telescopes to the same location in the sky that Big Ear was searching in hopes of seeing a repeat signal.

In the last major study on the subject, amateur astronomer and longtime Wow observer Robert Gray and University of Tasmania professor Simon Ellington published an article in the October 2002 issue of Astrophysical Journal entitled, “A search for periodic emissions at the Wow locale.” And like all the previous studies before it, Gray and Ellington came up empty.

Shostak, the senior astronomer at SETI, said Wow was just one of several signals detected in the early days of SETI that never appeared again, and suggests it may have had something to do with the recording methods at the time.

“Back then, it was impossible to check the results as they happened. The telescope would take its readings and print them out, and days later someone would look at it. So there was no way to immediately verify the results.”

He said that since then, radio telescopes and the search for signals has become more advanced, with computer technology leading to faster and faster analysis.