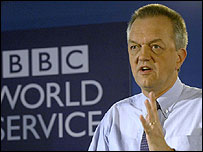 The BBC World Service has received £70 million ($142 million) over three years in extra coin from the U.K. government to boost its start-up Arabic and Farsi news channels.

The announcement, made by chancellor of the exchequer Alistair Darling during his comprehensive spending review announcement Tuesday, comes at a time when the Brit pubcaster is preparing to ax up to 2,800 jobs — around 12% of the workforce — as part of a cost-cutting drive following a below the rate of inflation annual license fee increase.

The Treasury’s announcement formally confirms the £15 million ($30 million) a year funding for the Farsi language channel that then-chancellor and current Prime Minister Gordon Brown originally announced in October 2006. The channel, targeted at satellite and cable viewers in Iran, is set to launch sometime next year.

The Arabic language news channel will also receive an extra £6 million ($12 million) a year so that it can up its broadcasts to 24 hours a day. The newscaster is currently set to broadcast for 12 hours a day, at a cost of £19 million ($38 million) a year, once it launches by the end of the year. It is expected that the extra coin, and enhanced transmission, will kick in after April next year.

A further $1 million ($2 million) a year has also been committed to enhance the BBC World Service’s multi-media operations in languages relevant to ethnic communities living in the U.K.

“It specifically means that audiences in the Middle East and Iran will have multi-media access — through television, radio and online — to trusted journalism of the highest standing and increased opportunity for dialogue and debate,” said BBC World Service director Nigel Chapman.

The BBC already has a high profile in the Middle East thanks to its long-standing and respected Arabic service radio broadcasts. The service is the BBC’s oldest language service after English and will mark its 70th anniversary in January 2008.

The BBC’s Persian web service is also known to be popular with Iranian auds and has been subjected to blocking and filtering by Iranian authorities.

With so much political instability in the Middle East, Western governments have increasingly looked to increase their use of soft power tools such as the media to get their message directly to Iranian and Arab audiences.

In 2006, U.S. secretary of state Condoleezza Rice introduced an appropriations bill before the Senate foreign relations committee asking for $75 million in funding to ramp up the government’s soft diplomacy capabilities, with the intention that half of that sum would go to support for the U.S.-operated Farsi language satcaster Voice of America and Radio Farda.

The BBC’s free-to-air Farsi news channel will initially broadcast for eight hours a day and be broadcast at primetime in Iran.

“We believe this will be a popular and valuable asset for audiences in this troubled region,” said Chapman.