Francois Zanella, a 58 year old former mine worker has built a cruise ship at his home in Morsbach, Moselle in North-Eastern part of France.

He started building his ship on August 10-th, 1994. By that time, he had already spent more than 3,500 hours designing in excruciating detail all the components of the ship. It took him 11 long years to build the ship, a process that was completed on June 23, 2005. On that day his ship started sailing from port Sarreguemines. 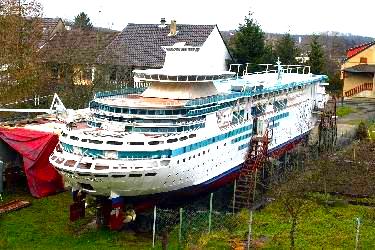 He also became quite famous in France because of this project. One of the main TV channels in the country – France 3 – created a special program named Thalassa which followed his work during the construction process. He received considerable amount of fan mail because of that.

Currently Francois is enjoying the fruits of his labor by traveling around the world in his own cruise ship – Majesty of the Seas.