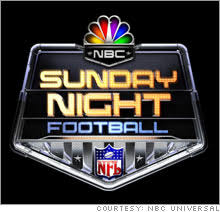 With spots in “Sunday Night Football” drawing more than $500,000 for 30 seconds, NBC Sports is taking another pass at selling the sponsorship to its post-game show.

NBC expects post-game sponsorship talks will heat up in the next few weeks, now that buyers have largely finalized their fourth-quarter upfront buys, according to Seth Winter, senior VP of sales and marketing for NBC Universal Sports & Olympics.

Sales of “Sunday Night Football” are 25 percent ahead of last year, which was the first season NBC had the National Football League’s prime-time package, Mr. Winter said. In the upfront, prices for commercials during the games rose by double digits on the basis of the cost to reach a thousand viewers (CPM).

In the scatter market, where ads are bought closer to the time they air, prices are up by double-digit percentages again, driving the unit price of some spots in the pre-Christmas weeks above $500,000.

“That’s comparable to some of the most highly rated prime time shows,” Mr. Winter said.

NBC Sports improved its sales results in part by changing the way it estimated its “Sunday Night Football” audiences. Instead of making a single estimate for the entire season, it created individual estimates for each game. The process had the effect of raising the total audience NBC Sports would try to sell by 10 percent. (Last season, ratings of “Sunday Night Football” met or exceeded the audience guarantees to sponsors.)

Ad buyers said NBC’s new estimates are still in line with their expectations.

“If you know the match-ups closer in, if it’s a 5-and-1 team against a 4-and-2 team, you’re probably going to see a higher rating than it being Cleveland against Baltimore,” Mr. Novenstern added.

A very tight scatter market for prime time is driving prices up by 25 percent to 40 percent, he added. That pricing is making NBC’s “Sunday Night Football” look more attractive. He recently made a prime-time scatter buy on NBC that included NFL spots for a client that was planning a last-minute promotion.

Since the prices of all prime-time shows are rising, the client wanted a better mix of shows as long as it was paying top dollar, Mr. Novenstern said, adding, “They would prefer to see higher-rated programming in there if they have to bite the bullet.”

“Sunday Night Football” is about 90 percent sold out, depending upon the game, Mr. Winter said.