To its true believers at small businesses, it is a low-cost, high-return tool that can handle marketing and public relations, raise the company profile and build the brand.

That tool is blogging, though small businesses with blogs are still a distinct minority. A recent American Express survey found that only 5 percent of businesses with fewer than 100 employees have blogs. Other experts put the number slightly higher.

But while blogs may be useful to many more small businesses, even blogging experts do not recommend it for the majority.

Guy Kawasaki, a serial entrepreneur, managing partner of Garage Technology Ventures and a prolific blogger, put it this way: “If you’re a clothing manufacturer or a restaurant, blogging is probably not as high on your list as making good food or good clothes.”

Blogging requires a large time commitment and some writing skills, which not every small business has on hand.

But some companies are suited to blogging. The most obvious candidates, said Aliza Sherman Risdahl, author of “The Everything Blogging Book” (Adams Media 2006), are consultants. “They are experts in their fields and are in the business of telling people what to do.”

For other companies, Ms. Risdahl said, it can be challenging to find a legitimate reason for blogging unless the sector served has a steep learning curve (like wine), a lifestyle associated with certain products or service (like camping gear or pet products) or a social mission (like improving the environment or donating a portion of revenues to charity).

Even in those niches, Ms. Risdahl said that companies need to focus on a strategy for their blogging and figure out if they have enough to say.

“As a consultant, blogging clearly helps you get hired,” she said. “If you are selling a product, you have to be much more creative because people don’t want to read a commercial.”

Sarah E. Endline, chief executive of sweetriot, which makes organic chocolate snacks, said she started blogging a few months before starting her company in 2005 to give people a behind-the-scenes look at the business.

The kind of transparency is a popular reason for blogging, particularly for companies that want to be identified as mission-oriented or socially responsible.

A typical post on sweetriot’s blog described the arrival of the company’s first cacao shipment from South America and how Ms. Endline met the truck on Labor Day weekend after it passed through customs at Kennedy International Airport. 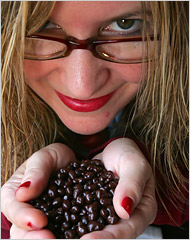 Post the meat of your blog posting here. Make it long.She wrote about climbing aboard to inspect the goods and then praised the owner of Gateway trucking company, who helped her sort through the boxes so that she could examine the product.

“At sweetriot we don’t use the word ‘vendors’ as we believe it is about partnership with anyone with whom we work,” she wrote.

For companies in the technology sector, having a blog is pretty much expected. Still, Tony Stubblebine, the founder and chief executive of CrowdVine, a company that builds social networks for conferences, said that one of his main reasons for blogging is to show that his business model is different from the typical technology start-up.

“Everyone in Silicon Valley is focused on venture capital funding and having an exit strategy,” he said. “Because I’m not focused on raising money, I can focus on my customers, since they aren’t a stepping stone to some acquisition or I.P.O.”

He added: “I’m trying to create a community of help for small Internet businesses like mine. My blogging philosophy is like the open source model in software. It’s sort of a hippie concept. If I can help other people, it’s personally rewarding. And those people will likely pay it back in some ways.”

Mr. Stubblebine said he gets new customers largely by word of mouth, and he uses the blog as a way to share news with friends and people who wield influence in his industry as well as a reference check for customers. “That’s why I cover the growth of the company.”

David Harlow, a lawyer and health care consultant in Boston, said he started his blog, HealthBlawg, as a way of marketing himself after he left a large law firm and opened his own practice. Besides, he said, blogging was easy to get started and the technology was straightforward.

Now, after about two years of blogging, Mr. Harlow said he was pleased with the results. He gets about 200 to 300 visits a day, he said. He has also become a source for publications looking for commentary on regulatory issues in the health care field and has even gained a few clients because of the blog. In addition, he has formed relationships with other legal bloggers (who call themselves blawgers) and consultants around the country.