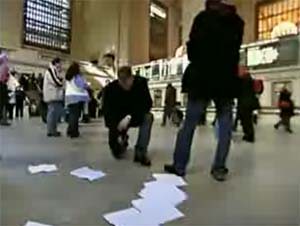 On a cold Saturday morning in January, a flash mob of Improv Everywhere Agents descended on New York City‘s Grand Central train station and left the entire concourse in a state of complete confusion.

Flash Mob – a large group of people who assemble suddenly in a public place, perform an unusual action for a brief period of time, then quickly disperse.

What did they do that had everyone so confused? This flash mob of 200+ people suddenly froze in place at the exact same second for 5 minutes in the Main Concourse of Grand Central Station. The frozen poses ranged from people tying their shoes and eating to someone who just dropped a stack of papers. Everyone from tourists to cops stopped in amazement to try to figure out what was happening around them.

My favorite part is the guy trying to drive his garbage cart. He sounds like such a baby when he gets on his radio to call for help.

If the video above doesn’t load, you can view it here.
Related Articles: