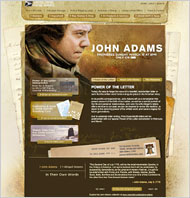 HBO and the Postal Service are joining forces for the first time to co-sponsor a multimillion-dollar multimedia campaign that is intended to evoke the pleasures of sitting right down and writing yourself — or anyone — a letter.

The campaign, by the Civic Entertainment Group in New York, seeks to demonstrate what it calls the “power of the letter,” which is also the U.R.L. for a special Postal Service Web site that is a central element of the campaign (thepoweroftheletter.com).

The Web site is the work of AKQA, which was recently named digital agency of the year by the trade publication Adweek. A Web site from HBO devoted to the mini-series (johnadams08.com) also directs visitors to the Postal Service’s letter site.

The campaign also appears on the main Postal Service Web site (usps.com) as well as on placards and posters in post offices around the country.

Even the cancellation marks on envelopes and the sales receipts given by postal employees carry the address of the special Web site, along with a quotation from Adams: “Let us dare to read, think, speak and write.”

For those of you worried that the cost of the campaign — estimated at $5 million to $10 million — may be a reason that the Postal Service will soon raise the price of a first-class stamp, fear not. HBO, part of Time Warner, is paying the bill.

The inspiration for the campaign — and the Postal Service’s involvement — is the reputation of Adams and his wife, Abigail, as prolific letter writers. They exchanged more than 1,100 letters from 1762 until 1801, dating from their courtship through his presidency.

Indeed, in the Broadway and movie versions of the musical “1776,” the songs sung by the actors playing John and Abigail Adams were based on the contents of their letters.

The campaign is indicative of a couple of trends. One is the growing willingness of marketers — including media companies like Time Warner, which make entertainment products — to look beyond conventional outlets for their sales pitches.

The campaign to encourage viewers to watch “John Adams” includes commercials on television and in movie theaters, as well as outdoor advertising and newspapers ads.

But the Postal Service offered an “opportunity to extend communication beyond traditional advertising platforms, on a scope and scale that’s pretty broad and impressive,” said Zach Enterlin, vice president for advertising and promotion at HBO in New York.

“We have a presence in almost 13,000 locations,” he added, referring to the posters and placards in the post offices. And the cancellation marks promoting the mini-series are to appear on more than three billion pieces of mail.