Not known for its dark marketing, McDonald’s is more a try-our-new-salad, get-your-Shrek-action-figure, look-at-our-dollar-menu sort of place.

For that reason, gamers were surprised to learn that McDonald’s was the sponsor of an enigmatic Olympic-themed online game called The Lost Ring, introduced last month. Nothing about the game was branded McDonald’s, and the game’s Web sites — mysterious and hip, like “Lost” mixed with “The Blair Witch Project”— were a far cry from the golden arches.

“The Olympics in Beijing are a very big event for us, and we have a lot of different types of activation, with The Lost Ring being the most creative,” said Mary Dillon, McDonald’s global chief marketing officer. “Our goal is really about strengthening our bond with the global youth culture.” 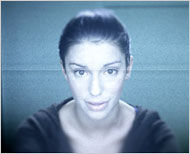 The Lost Ring is part of a gaming genre called alternate-reality games that blend online and offline clues and rely on players collaborating to solve the puzzles.

While corporate sponsorship of these games is common — a popular one called The Beast was created by Microsoft for the Warner Brothers film “A.I.: Artificial Intelligence” — this is McDonald’s first foray into the genre.

The game began with 50 bloggers receiving packages with an Olympic-themed poster and a clue pointing them to TheLostRing.com. The site presented a dramatic trailer, replete with sci-fi lighting and a narrator with a British-accented baritone speaking over scenes of a woman waking up in a field with “Trovu la ringon perditan” — an Esperanto phrase — tattooed on her arm.

Within a day or two, as players searched for clues, they found the terms of service on the Web site, which revealed that McDonald’s, in partnership with the International Olympic Committee, was behind the game.

“I think finding out that it was McDonald’s was kind of a big shock for everyone,” said Geoff May, a player in Ontario who founded a Web site (olympics.wikibruce.com) on the game. “Obviously it’s McDonald’s, and not everyone likes them,” he said. “Personally, I don’t mind as long as we don’t get products forced down our throat. If we’re getting McDonald’s meals sold by characters, it’s going to be hard to suspend our disbelief.”

That’s part of the reason McDonald’s has remained behind the curtain thus far. A successful alternate-reality game relies on the players’ continuing interest.

“If an A.R.G. is too clearly corporate or commercial, the gamers will not want to engage,” said Tracy Tuten, an associate professor at Virginia Commonwealth University, who studies new-media marketing tools. “It’s very important that the game be written in a way where the branding is not obvious.”

McDonald’s has been careful to reflect that, Ms. Dillon said. “Above all, we want to be credible, authentic and respectful to this new audience,” she said.