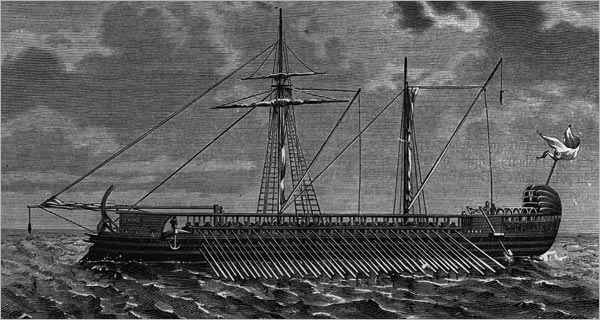 Consider the galley slave, clad in rags, chained to a hardwood bench and clinging to an oar as long as a three-story flagpole. A burly man with a whip walks back and forth shouting encouragement. You’ve seen the movie.

That galley slave would have known that the rowing stations in the middle of the ship were best, although he might not have known why. That took scholars to figure out. “Think of the oar as a lever,” Prof. Mark Schiefsky of the Harvard classics department said. “Think of the oarlock as a fulcrum, and think of the sea as the weight.”

The longer the lever arm on the rower’s side of the fulcrum, the easier to move the weight. In the middle of the ship, as the rowers knew, the distance from hands to oarlock was longest. 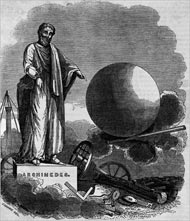 This explanation is given in Problem 4 of the classical Greek treatise “Mechanical Problems,” from the third century B.C., the first known text on the science of mechanics and the first to explain how a lever works. It preceded, by at least a generation, Archimedes’ “On the Equilibrium of Plane Figures,” which presented the first formal proof of the law of the lever.

Dr. Schiefsky teaches Greek and Latin as his day job and reads Thucydides and Sophocles in ancient Greek for fun. He also majored in astronomy as an undergraduate, and about nine years ago, feeling science-deprived, he joined a multinational research endeavor called the Archimedes Project, based at the Max Planck Institute for the History of Science in Berlin.

The Archimedes team studies the history of mechanics, how people thought about simple machines like the lever, the wheel and axle, the balance, the pulley, the wedge and the screw and how they turned their thoughts into theories and principles.

The textual record begins with “Mechanical Problems,” moves to Rome and then through the medieval Islamic world to the Renaissance. It ends, finally, with Newton, who described many of the basic laws of mechanics in the 18th century.

There are a surprising number of old, and extremely old, scientific texts that have survived the ravages of time in one form or another. The Archimedes Web site lists far more than 100, including Euclid’s geometry, Hero of Alexandria’s Roman-era technical manual on crossbows and catapults, medieval treatises on algebra and mechanics by Jordanus de Nemore and Galileo’s 17th-century defense of a heliocentric solar system.

The nice thing for Dr. Schiefsky is that hardly anyone reads the stuff. Scientists generally are not into ancient Greek or Latin, let alone Arabic, and most of Dr. Schiefsky’s colleagues work on literature, philosophy, philology or archaeology. In fact, Dr. Schiefsky suggests “about 100 people” worldwide work on both science and the classics.

By following the historical record, the Archimedes researchers have discovered that the evolution of physics — or, at least, mechanics — is based on an interplay between practice and theory. The practical use comes first, theory second. Artisans build machines and use them but do not think about why they work. Theorists explain the machines and then derive principles that can be used to construct more complex machines.

The Archimedes researchers say that by studying this dialectic they can better understand what people knew about the natural world at a given time and how that knowledge may have affected their lives.

“What do you do when you want to weigh a 100-pound piece of meat and you don’t have a 100-pound counterweight?” Dr. Schiefsky asked. “You use an unequal-armed balance, with a small weight on the long arm and the meat on the short arm.”

The uneven balance, known as a steelyard, is a kind of lever, and Dr. Schiefsky notes that it has a cameo in Aristophanes’ “Peace,” a comic fantasy about ending the Peloponnesian War. When a furious arms dealer cannot figure out what to do with a surplus war trumpet, Trygaeus, the central character, suggests pouring lead in the bell to make a steelyard.

Referring to the mouthpiece, Trygaeus says, “Attach at this end a scale-pan hung on cords, and you’ll have the very thing to weigh out figs to your servants out in the country.”