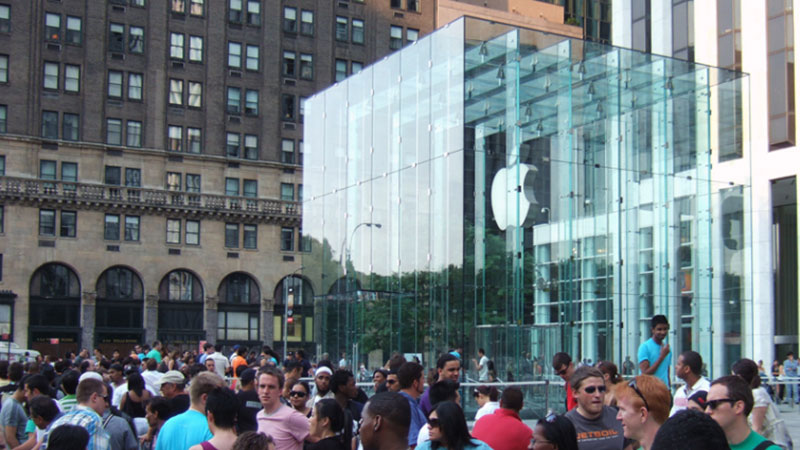 This morning I had to go buy another copy of Mac OS X Leopard (my original copy got scratched). As I walked closer to the Apple Store on 5th Avenue in New York City I was somewhat surprised to see a line of about 50 people waiting in line. The iPhone 3G announcement isn’t rumored to happen until next month on June 9th right? Are these people going to wait in line for over 2 weeks or do they know something we don’t? I asked the security guard by the Cube what was going on and he said it was for the iPhone. He wouldn’t say if it was for the 3G iPhone or for old iPhone leftover inventory That’s all he knew and he very was annoyed at me for asking him about the iPhone line. I’m doubt I was the first person to ask.

Still confused I walked downstairs and bought my copy of Leopard. Before I left the Apple Store, I asked Jessica, my cashier, if the people outside were waiting for the new 3G iPhone. She cryptically said “They are waiting to buy an iPhone. We will sell them whatever phones we have in stock.” She was kind of pissed off too. For some reason the majority of people waiting in line were Asian. I was later informed by a friend that to get around “purchase per-person quantity restrictions,” you can pay people (usually from Chinatown I guess?) to buy you extra iPhones and even hold your place in line. The line is most likely for people looking to get their hands on the current iPhone and ship it overseas, but I wonder how many of these people will still be in line on June 9th.