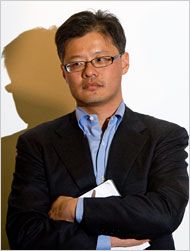 People involved in relationships that end abruptly often have grossly conflicting accounts of what went wrong. On Monday, Jerry Yang gave his version.

In an interview, Mr. Yang, Yahoo’s co-founder and chief executive, addressed Microsoft’s surprise $44.6 billion bid to buy his company and the three-month corporate tussle that ensued.

He said he was open to selling Yahoo to Microsoft all along, but that Steven A. Ballmer, Microsoft’s chief executive, and his deal makers ultimately declined to negotiate and withdrew their proposal on Saturday with little explanation.

“They chose to walk away after we put a price on the table, and they didn’t want to negotiate,” Mr. Yang said. “From my perspective, we were open all along to selling to Microsoft. We just feel Yahoo, either stand-alone or with Microsoft, is worth more than what they put on the table.”

Mr. Yang’s account conflicts with that of Microsoft’s advisers and executives. They have said that they received no counteroffer from Yahoo for three months, after Microsoft’s deadline to consummate the deal had expired. They also say that Mr. Yang and his board settled on a price of $37 a share and ultimately refused to budge.

Microsoft had raised its initial bid to $33 a share when Mr. Yang and his co-founder, David Filo, met with Mr. Ballmer and other Microsoft executives at the Seattle airport on Saturday. After that meeting, Mr. Ballmer made public a letter to Mr. Yang withdrawing the offer. “I am disappointed that Yahoo has not moved towards accepting our offer,” he wrote.

In the interview Monday, Mr. Yang and Roy Bostock, Yahoo’s chairman, said that throughout the process they were open and receptive to a merger with Microsoft. Mr. Yang said that he spent personal time alone with Mr. Ballmer but that they were ultimately unable to bridge their differences.

Mr. Yang also looked ahead to the daunting task of guiding Yahoo’s growth as an independent company — under heavy scrutiny. Mr. Yang — who last June took control of the company he co-founded, acting after the departure of the prior chief, Terry Semel — must now quickly demonstrate that Yahoo can increase its revenues and share price while navigating an online advertising industry that is quickly coming to be dominated by Google.

“I feel like we now have the task to continue to build shareholder value,” he said. “This is just creating another set of challenges we have to overcome as a company. We have to show the world the opportunity that we have been talking about for the last three months.”

One immediate problem for Mr. Yang is frustration among shareholders — including some of the largest ones. In reaction to the deal’s collapse, Yahoo’s stock fell almost 15 percent on Monday, to $24.47.

“I am extremely angry at Jerry Yang and at the so-called independent board,” said Gordon Crawford, portfolio manager for Capital Research Global Investors, which owns 6 percent of Yahoo. The firm’s parent company owns a total of 16 percent of Yahoo, making it the largest shareholder.

Mr. Crawford questioned a statement from Mr. Bostock in which he said the company was pleased that so many shareholders had supported its position.

“I would love to know who these shareholders are,” Mr. Crawford said. “It’s none of the ones that I talked to today. Everybody I talked to would have sold their stock at $34.”

“I’m hoping that there is such an outpouring of outrage that the board is embarrassed into revisiting this thing,” Mr. Crawford added, “but I’m not optimistic about that.”

Making Mr. Yang’s job even harder is the recession’s effect on the online advertising market and intense day-to-day scrutiny from Wall Street analysts and shareholders, who will view any more vague long-term plans from Yahoo’s management team with skepticism.

“Yahoo is now in a position where it has to prove its worth quickly,” said Derek Brown, an analyst at Cantor Fitzgerald & Company. “It’s as if there are many things happening behind the scenes that have given Yahoo management so much confidence. We need to see what those things are.”

Mr. Yang argued that the Microsoft bid had opened up new doors for Yahoo. “We feel Microsoft approaching us has created an opportunity for us to talk to just about anybody and everybody in the industry,” he said. He said the company would do new deals “in a way that ensures that it’s the right thing to do for Yahoo, and not because of some time pressure.”

One of those deals could be a tie-up with its chief rival, Google. In April, Yahoo conducted a two-week advertising test with Google, whereby Google served up its own more lucrative ads on 3 percent of Yahoo searches in the United States. The companies said the trial was successful and that they were exploring an extension of it, though some analysts say that could raise antitrust issues in Washington.

“Anything we might do with Google would allow us to maintain the ability to compete in what is important to us,” Mr. Yang said. He declined to say whether Yahoo would pursue such a deal.

Christa Quarles, an analyst at Thomas Weisel, said a deal with Google could have the long-term effect of strengthening Yahoo’s largest rival. “At the end of it you wouldn’t have an alternative to Google,” Ms. Quarles said. “It would be thrust into the very powerful position of being the only real provisioner of paid search.”

Yahoo might also consider tie-ups with AOL, a division of Time Warner, and MySpace, a division of News Corporation, though shareholders and analysts seem unenthusiastic about those options. Mr. Yang would not address speculation about those deals.