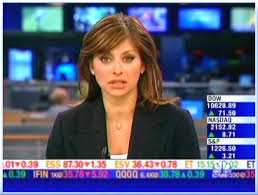 The economic meltdown has been a bear for Wall Street but it’s proving bullish for business news network CNBC.

The NBC Universal property’s business day audience, measured from 5 a.m. to 7 p.m., rose to an all-time best in October, and it saw huge gains in primetime too as worried investors clicked over to track the volatile market.

The network, which usually segues into reruns or pretaped programming in primetime, introduced live segments during the worst of the crisis, when the Dow was plummeting by hundreds of points per day and the federal bailout was being pushed through Congress. It debuted a new primetime personal finance show, “On the Money,” which helped lead to more gains.

The network says all programs from 6 a.m. to 7 p.m. had their best month ever in total viewers in their time periods. All numbers are measured by Nielsen and do not include out-of-home audience, which the network has long maintained makes up a large and untapped portion of its viewership at work, during business travel, in hotels, in health clubs, etc.

The big gains come a year after News Corp.’s competing Fox Business Network launched amid much bravado and media attention. But during the worst financial crisis the country has seen in decades, CNBC remained the dominant destination for financial news.

That’s in part because FBN’s distribution remains tiny, available in only about a third of the 95 million homes that receive CNBC. Though both networks saw their ratings spike during the financial crisis, CNBC’s audience still dwarfs that of FBN, whose ratings remain too small to be reliably measured by Nielsen.

But another part of CNBC’s success during this period of financial distress has been the network’s success in branding itself as the business expert. Its correspondents, most notably Maria Bartiromo, have made frequent appearances on the top-rated “NBC Nightly News with Brian Williams,” exposing them to new potential viewers and further establishing the network as the go-to place for financial news.