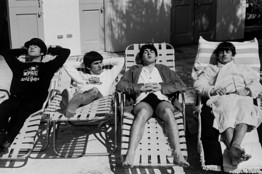 The Beatles have licensed songs to MTV Networks’ Rock Band videogame series, according to several people familiar with the matter, a coup for the Viacom Inc. unit in its battle with rival Activision Blizzard Inc. for supremacy in the world of rock-and-roll videogames.

The deal, which is set to be announced on Thursday by Viacom’s MTV and the band’s own Apple Corps Ltd., makes the Beatles the next and biggest major band to license its songs to a music-oriented videogame, joining Aerosmith, Metallica, AC/DC and others.

Rock Band and Activision’s Guitar Hero have engaged in heated competition over exclusive rights to use music by major acts, entering multimillion-dollar licensing agreements with a handful of the biggest names in the business.

The games let players use plastic game controllers, shaped like miniature musical instruments, to simulate playing rock and pop songs. Players are scored on how well they hit notes.

The Beatles represent the biggest prize to date in the category. Not only do they have the best-selling album catalog of any band, they haven’t yet licensed their music for sale by download services such as Apple Inc.’s iTunes Store.

A spokesman for Apple Corps didn’t return a call for comment. Spokeswomen for EMI Group Ltd., the Beatles’ record label, and for MTV declined to comment.

Speculating on when the Beatles will reach a deal to sell downloads of their catalog is a music-industry pastime. The fact that a videogame publisher beat iTunes and its rivals to the punch highlights the growing importance of music-oriented game titles. With recorded-music sales in a long, steep decline, videogames can be more lucrative for big, sought-after bands than traditional sales.

According to DFC Intelligence, which follows the industry, music and dance games generated more than $1.2 billion in domestic revenue in 2007; sales this year already had come close to $1 billion at the end of September.

For MTV, the deal adds luster to the Rock Band series. It made its debut a year ago, a couple of years after the original Guitar Hero came out for Sony Corp.’s PlayStation 2 console. Guitar Hero initially included only a make-believe guitar, while Rock Band added drums and vocals to the game.

DFC estimates that Guitar Hero and its sequels have generated more than $1.5 billion in cumulative revenue so far, three times as much as Rock Band. However, the two games are competing neck-and-neck so far this year, with MTV’s launch of Rock Band 2 and Activision’s latest, Guitar Hero World Tour, this past Sunday. Guitar Hero has issued seven titles to date, while Rock Band — distributed by Electronic Arts Inc. — has put out just two titles.

Beatles songs available on a Rock Band game are likely to be popular, but analysts point out that the challenge will be in reaching out to Beatles fans, many of whom are in their 50s and 60s, and marketing the game in a way that will persuade them to buy a videogame console and try the game.

Key details about the Beatles game release couldn’t be learned, such as which songs, and from what era of the band’s career, are to be included. A release date and price also couldn’t be learned. Rock Band is a product of Harmonix, a division of MTV.

Rock Band has taken on added importance to Viacom as its cable networks reel from the sluggish advertising market. The company doesn’t break out Rock Band revenue, but in the first half of the year, the game drove Viacom’s media networks to pull in $639 million in world-wide ancillary revenue, a 67% increase over the year-earlier period, according to filings. That growth appears to be continuing: In the third quarter, ancillary revenue increased at a “double-digit rate,” even as U.S. ad sales on Viacom’s cable networks, such as MTV, fell 3%, the company said.