When the movie “Milk” comes next month to Claremont, a college town about 30 miles from here, Patrick Milliner intends to greet it with a candlelight vigil protesting the newly passed state prohibition of gay marriage.

“It fits perfectly with the plan,” Mr. Milliner said.

The convergence of “Milk,” which portrays gay-rights battles of 30 years ago, and a looming new culture war over homosexual marriage and other issues, has raised unusual expectations around Focus Features’ plan to release the film. It will be shown in a widening group of theaters, beginning with some in New York, Los Angeles and about a dozen other cities on Wednesday. 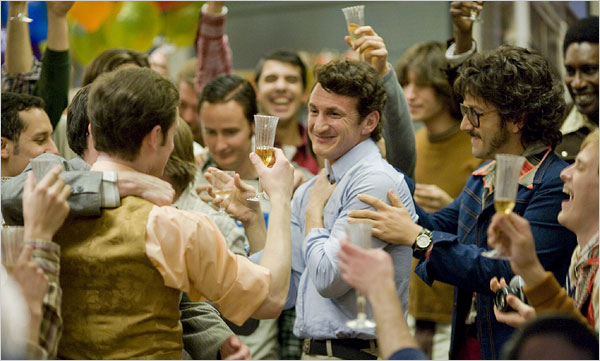 Proposition 8-related vigils have already occurred outside prerelease screenings in San Francisco and Los Angeles. Amy Balliett, a founder of jointheimpact.com, a clearing house for gay rights information, said on Friday that her site would urge its network of supporters to see the film on Dec. 5 at one of a list of “gay-friendly” theaters.

“Our goal is to make this movie one of the top three-grossing movies of the weekend,” Ms. Balliett said in an e-mail message.

Yet the unforeseen alignment between “Milk” and the gay-marriage ban — there was no Proposition 8 on any ballot when the director Gus Van Sant began shooting the film in January — also creates a conundrum for those Focus executives. How do they honor their movie hero’s feisty brand of confrontational politics without being consumed by them?

To join the fight could turn off some of the viewers Focus needs to make “Milk” a broad-based hit. But to sidestep it might disappoint a core audience that has begun to see the film as a rallying point.

Mr. Milk, played in the movie by Sean Penn, was not one to pull punches. “If this thing passes, fight the hell back!” Mr. Penn says at a pivotal point in the film, as his allies ponder the likely passage of Proposition 6, a 1978 ballot initiative aimed at curbing gay rights in California. (It failed.)

But Focus has been stepping carefully of late.

In a particularly ticklish exercise, the studio continues to plan showings of “Milk” in theaters owned by the Cinemark chain, whose chief executive, Alan Stock, donated to the campaign for Proposition 8.

Taking a cue from Milk — who made his political breakthrough by supporting a union boycott of Coors beer — opponents of the marriage ban have begun their own boycott through a Web site, NoMilkforCinemark.com.

In a statement issued on Wednesday, Cinemark, one of the country’s largest theater chains, said its decision to proceed with plans to show the movie also reflected a principle: “It would be inappropriate to influence our employees’ position on personal issues outside the work environment, especially on political, social or religious activities.”

On Thursday James Schamus, the chief executive of Focus, struck a diplomatic note. “I know there’s a lot of anger out there,” said Mr. Schamus, who noted that Cinemark three years ago was among the first chains to embrace the studio’s gay-themed “Brokeback Mountain.”

“I hope that gets settled,” he said of the boycott call.

With similar delicacy, Dustin Lance Black, the film’s writer, and Cleve Jones — a Milk associate who is portrayed by Emile Hirsch in the movie, and served as its historical consultant — published a manifesto in The San Francisco Chronicle last week calling on President-elect Barack Obama, who has opposed same-sex marriage, to support comprehensive federal legislation guaranteeing gay rights, including the right to marry.

But the pair did not identify the manifesto with “Milk,” despite the film’s strong call for exactly such equality.

“I don’t know that it would be appropriate,” Mr. Jones said of any effort to align the movie with the campaign against marriage bans in California and other states. The danger, he said, was that conscious campaigning might seem to exploit, rather than support, Mr. Milk and his legacy.

Even so, Mr. Jones, over the last few weeks, has conducted politically robust discussions keyed to Focus-sponsored college screenings of “Milk” in a number of cities, including Boston and Washington.

Speaking separately, Mr. Black said he viewed the movie itself as a contribution to the movement it portrays. And the manifesto, with its call for broad federal action, he added, was directly inspired by Mr. Milk’s critical stance toward gay contemporaries who demanded too little.

“They weren’t asking for what they wanted,” said Mr. Black, who spoke from Salt Lake City, where he was planning to screen the film on Friday. “They were asking for crumbs.”

In the same spirit, Daniel Nicoletta — another Milk associate, who is portrayed in the film by Lucas Grabeel of “High School Musical”— said last week that he believed the opposition to Proposition 8 would inevitably fade, but that he hoped for a boost from the movie’s release. “We need that excitement,” he said, speaking of actions like the one planned by Mr. Milliner.

In Mr. Schamus’s view, the filmmakers and others are free to politick as they please.

But, he said, to identify “Milk” directly with a position — even one popular enough among Oscar voters to enhance the film’s prospects in a heated awards race — is to misunderstand how the cinema really effects change.

“The way movies work is not by pushing toward or appealing to a specific electoral position, but by changing the climate of opinion,” Mr. Schamus said.

And to push too hard, he cautioned, risks losing sight of what he sees as the main point of “Milk”: “There is actually a great, old-fashioned American narrative movie here.”