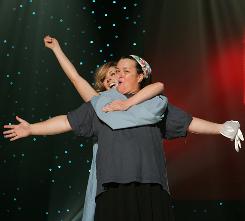 It’s Rosie with a Z.

During rehearsals, the two women shimmy across a Midtown stage working on a tune Minnelli hasn’t sung in 30 years.

“Good,” O’Donnell says, nodding to Minnelli after they complete their duet.

On stage, O’Donnell, 46, is both practical and comical. “It’s gonna be a very gay show, whether they know it or not. Gay is the new black — or at least the new pink,” O’Donnell quips to the backup dancers and crew.

In fact, Rosie Live is meant to be neither political or controversial. It’s an hour-long show featuring performances from Alanis Morissette, Clay Aiken, Gloria Estefan and 30 Rock’s Jane Krakowski. If the special does well, it could become a series.

“It’s like being shot out of a cannon. Tomorrow is going to be fantastic. I’m so nervous!” Krakowski says after a second performance of her number, a parody of You Gotta Get a Gimmick.

Those who work with O’Donnell say she’s a perfectionist.

“For her, it’s all about surrounding herself with people she likes and trusts,” says Rosie Live executive producer David Friedman. “She’s got a million ideas. Everyone says that (she’s difficult), but she knows what she wants to do and she wants people around her who can execute and work hard. There is nothing difficult about her.”

For O’Donnell, who made headlines for her contentious relationship with her former View co-host Barbara Walters, the variety special is the realization of a longtime goal.

“This is a dream job. Once a week, you get to play with the people you love and admire. You don’t have to rush for commercials,” she says during a rehearsal break. “I grew up watching variety shows. I don’t really have the stamina or hunger that I did to perform every day, five days a week. It was a lot of time and a lot of public attention. This is the kind of show that is like doing a Broadway show — but you don’t have to do eight a week. Eight a week, with four children, is very difficult.”

Her children — Parker, 13, Chelsea, 11, Blake, 8, and Vivienne, 5 — with partner Kelli Carpenter will attend the show. Is O’Donnell, who has been very vocal about the perils of fame, concerned about being back in the spotlight?

“It’s the right amount for me. I had the show in daytime for six years and there was no controversy, besides the Tom Selleck and NRA thing,” she says.

“Although I seem to be an incendiary soul recently, a lot of it was due to the fact that I was on a program which encouraged you to speak your feelings — and I did. And some of those, at the time I spoke them, were controversial. They seem to have come more into favor.”

Does she ever watch The View?

“I haven’t really since I left. When I hear something crazy, I have to see,” she says. As for the latest Walters brouhaha, in which Walters commented on “ladies” who criticize the show, “I didn’t see that until it was on YouTube, truthfully. I didn’t watch it live. You know. It’s a hard thing.” 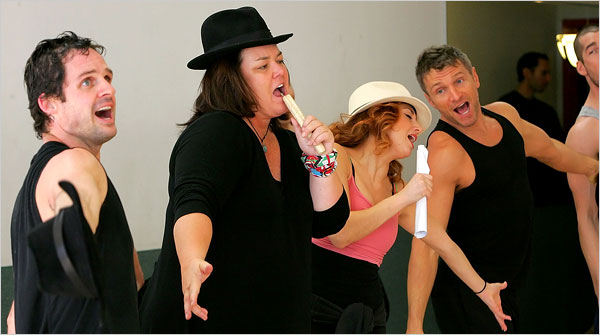