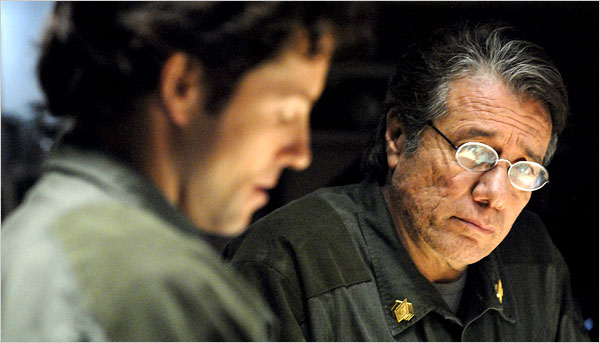 When you begin a series by killing off most of the human race, it sets a tone. For three and a half seasons now, no other show on television, not even the ticking-clock thriller “24,” has possessed the grim urgency of “Battlestar Galactica” on the Sci Fi Channel.

And no show — not even its other close network analogue, “Lost” — has built up the same degree of internal mythology and unanswered questions. That combination of apocalypse and Agatha Christie has generated one of the most fanatical fan bases in television.

So I won’t risk their wrath by giving away anything about Friday night’s new episode, the first since June and the first of what are to be the show’s final 10 installments. I won’t be identifying the regular character who dies, the one who was present since the mini-series that began “Galactica.” I won’t be saying anything about what the crew and its Cylon allies discover as they look around the ruined, irradiated Earth that they thought would be their new home. And don’t even ask who the 12th Cylon is. Actually, I don’t know — if it’s in the episode, it’s in the scene that was held back even from critics.

Like some other series with continuing narratives and looming mysteries, “Galactica” has gone on too long (even though it will end with a relatively modest 75 episodes). Some of the avenues it went down in the second and third seasons were irritating distractions. The squabbling over the political process and the debates about terrorism may make good fodder for critical essays and term papers, but they don’t make for good drama.

What’s important about “Battlestar Galactica” is simply that it’s a high-quality outer-space western, about a wagon train of spaceships trying to cross the desert and reach the promised land. (Or maybe it’s about a fleet of pilgrims trying to cross the ocean and reach America, given the whole 13 colonies of Kobol business.) With any luck, the producers will have ratcheted up the adventure and suspense in these last 10 episodes while dialing down the big ideas.

The overriding narrative force of “Galactica” has provided cover for some awfully spotty acting. But there has been good work too, by Mary McDonnell as the cancer-stricken President Roslin and James Callis as Gaius Baltar, a combination Judas and court jester. And there has been one revelation. It’s not the best performance on television, or even on “Galactica,” but there may be no one more perfectly cast right now than Edward James Olmos as the ramrod-straight Admiral Adama.

As the stoic but passionate Adama, Mr. Olmos has reined in his lifelong tendency to overact. He shows a previously unsuspected sense of humor, while giving the character a physical and vocal weight that makes him the heart of the show. Here’s my vote for Adama as the 12th Cylon — he deserves the attention.