It’s not every day that you see some medieval knights fighting on a sidewalk… unless you live in Pittsburgh. This mock battle scene between two LARP nerds was captured on camera by the Google Street View car as it drove through a suburban Pittsburgh neighborhood. 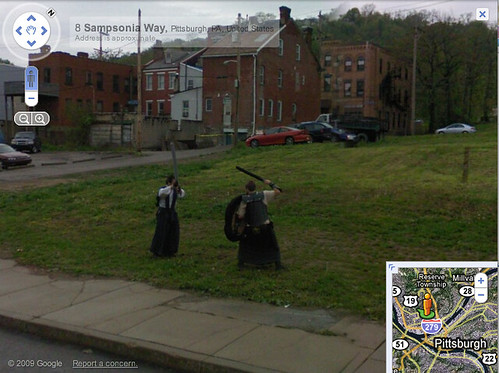 Here’s a link to the Google Street View interface for this LARP photo if you want to check out the rest of the neighborhood. If you pan a little to the left you’ll see a guy riding a bike. He’s clearly confused by the LARP fight.

Unfortunately, these two guys were dressed up and having a LARP battle at the exact moment the Google Street View car was driving around Pittsburgh taking pictures. In case you aren’t familiar with the term (please don’t feel bad if you aren’t), LARP stands for live action role-playing. The guys in the image above are basically acting out a live version of a World of Warcraft game… in public. LARPers have been known to get a little wild and even engage in sex games while in costume.

Google captures some oddities and interesting things with their cameras every day. Between their special Google Street View Cars and high-resolution satellite images, Google might have the most thorough record of life on Earth ever collected. But when you are photographing the entire planet, you are bound to find some oddities. Not to mention lots of embarrassing stuff.

Caught On Camera… By Google

Want more? LARP nerds battling in the streets of Pittsburgh are just the beginning! Here are some more things Google has captured on camera: