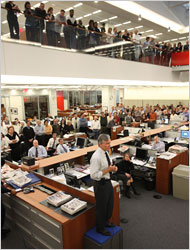 The cuts were mandated for management and nonunion employees, and the Newspaper Guild has been asked to agree to them for those it represents on the newsroom staff. If the union does not agree, Mr. Keller said during a meeting of hundreds of staff members in the paper’s main newsroom, “we will face layoffs, probably on the order of 60 to 70 people,” out of almost 1,300 on the news staff.

Also on Thursday, The Times laid off 100 people in its business operations, and Mr. Keller said it would make other cuts, like reducing spending on freelancers by 10 to 15 percent and possibly consolidating some sections.

The planned 5 percent pay cut for nine months, coupled with an additional 10 days of leave, would apply to most employees at the largest units, including The Times and the corporate offices, and to most nonunion employees at The Boston Globe.

Across the company, advertising revenue fell 13.1 percent in 2008, and 17.6 percent in the fourth quarter. Executives declined to provide any 2009 figures, but said that so far the year has been worse than expected. In a message to employees, Arthur Sulzberger Jr., the chairman, and Janet L. Robinson, the chief executive, wrote, “The environment we are in is the toughest we have seen in our years in business.”

The Washington Post announced on Thursday that it will offer buyouts to selected employees, including some in the newsroom, but did not say how many jobs it wants to eliminate. The Post has gone through three rounds of broader buyouts in the last six years, including one last year that drew more than 100 newsroom employees and more than 200 workers over all.

The Times Company’s pay reductions will be in effect from April through December, and staff members will revert to their previous salary level in 2010 unless economic conditions fail to improve, company officials said.

The Guild, which is the largest union at The Times and the only one the company asked for concessions, represents most newsroom employees, and a smaller number in other departments. The company declined to say whether it would seek any concessions from union employees at The Globe.

Mr. Keller said Times management was to meet with the Guild Thursday afternoon to discuss the requested cuts. Calls to Guild officers were not returned.

At smaller parts of the company, including About.com and a chain of small papers, wages will be cut 2.5 percent and employees will get five days off.

The layoffs announced Thursday represent almost 5 percent of the more than 2,000 employees in the business operations of The Times newspaper. The company laid off 27 people in The Times’s advertising department last month, and about 500 people in January, with the closing of City and Suburban, a newspaper and magazine distribution subsidiary. At the end of 2008, the company had 9,346 employees, down from 10,710 working in the same operations two years ago.

Last fall, Times executives said they did not anticipate any news staff reductions in 2009. Similarly, Mr. Keller said on Thursday that with a pay cut, management expects “that the newsroom will get through the year without a round of layoffs.”

In 2008, The Times eliminated 100 newsroom jobs through buyouts and layoffs. But with hiring for new positions, the net reduction was about half that. It has the largest news staff of any paper in the country, and one of few that has not contracted sharply.

Newspaper companies have been drastically shrinking payrolls in the last two years. And in recent months, several have resorted to mandatory unpaid leave, or furloughs, to reduce the number of layoffs.

The Times Company is characterizing its move with nonunion employees as a pay cut rather than a mandatory leave — though in practice, there may be little difference — to avoid strict federal rules governing furloughed employees. Other companies that have used furloughs have told workers, for instance, that they cannot make work-related phone calls or check work e-mail messages while on leave. Whether a cut for union employees is called a furlough will be subject to negotiation.

Separately, The Times newspaper will do away with the expanded index to its articles, created last year, that appears on the second and third pages, returning to something like the smaller guide that used to appear on the second page, saving several millions dollars annually on newsprint.