Australian snubfin dolphin fires jets of water from its mouth to round up fish, WWF discovers 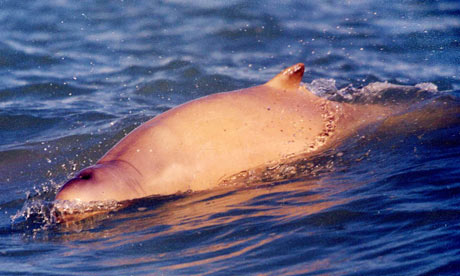 A rare species of Australian dolphin has been found to catch its fish prey by spitting water, according to research by WWF. The small snubfin dolphins hunt in groups and use their spitting technique to round up fish they have chased to the surface by firing jets of water from their mouths.

The unusual behaviour has only been observed in one other dolphin species, the Irrawaddy dolphin, which lives throughout south and south-east Asia.

“This is incredibly unusual behaviour, first seen in Australia off the Kimberley Coast,” said WWF Australia’s marine and coasts manager, Lydia Gibson. “It also confirms the snubfin dolphin is a fascinating animal, one which we know so little about.”

The snubfin dolphin (Orcaella heinsohni) was discovered in 2005 and is Australia’s only endemic dolphin species, meaning that it is unique to northern Australia. Virtually nothing is known about its behaviour or habits.

First sighted off the Kimberley coast near the resort town of Broome and dubbed “snubby” because of its blunt dorsal fin and rounded snout, the snubfin is struggling to survive.

New research by WWF indicates that Australia’s heavily populated coastline and rapidly expanding tourist developments near environmental wonders, such as the Great Barrier Reef, could see this species disappear before it is properly understood.

Classified as near threatened by the IUCN ‘red list’ of endangered species, WWF’s research shows the dolphin is particularly vulnerable to pollution, viruses and bacteria. It is also more likely than other dolphins to be ensnared by fishing nets because it prefers inshore estuarine habitats where river-nets are set.

“There are already development proposals – like the extension of the Townsville port – that could have major impacts on these species,” said Gibson. Dying mangroves, rising sea levels, dam construction and dredging of estuaries are also pushing the snubfins to the edge of extinction, according to the WWF.