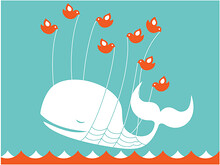 Although we all know the image as the “Fail Whale,” her original title for the illustration is ‘Lifting a Dreamer.’ Yiying uploaded her design to iStockphoto and never gave it a second thought… until the Twitter team found it.

As Twitter struggled to scale their infrastructure and meet their rapidly user growth, the site suffered frequent errors and chose to visually communicate those errors using Yiying’s ‘Dreamer’ image. Within weeks the Fail Whale had achieved cult-like status and the rest is history.