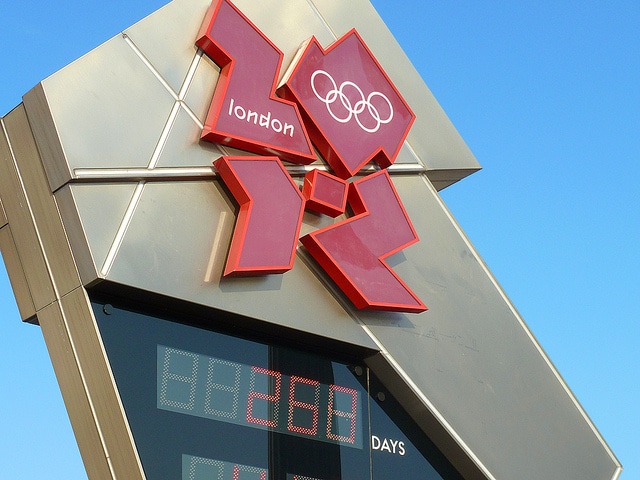 Do you feel that? There’s a fever spreading across the entire planet right now. No, it’s not a Zombie outbreak… It’s OLYMPIC FEVER!!!

Greetings, my name is Gia Pace (pictured right). I am one of the eclectic and off-beat writers here at MethodShop.com. Yes, I have Olympic fever. And yes, I’m totally going to the London 2012 Olympic games and plan on writing about my adventures for all of you MethodShop.com readers!

Since as far back as I can remember, I have always gotten chills upon hearing the choral cantata by greek Spyridon Samaras aka The Olympic Anthem And although I have never been a HUGE sports fan, this multi-event competition touches me because it isn’t just about a sports, it is about uniting the world.

Covering the Olympics is a big challenge, but I feel like I’ve already partly prepared for this assignment. For starters, I already know the lay of the land. Just last summer, I was lucky enough to go to London to live blog the drunken and naked silliness around Prince William and Cathernie Middleton‘s wedding. It was pretty crazy and there are a ton of pictures!

And in addition to knowing London inside and out, I also actually have some Olympic experience. In fact, I have a GOLD MEDAL! My last time on “Olympic soil” was 10 years ago at 2002 Salt Lake City Winter Games. I won’t ever forget the amazing experiences I had as a spectator in the snow with the Latter Day Saints. Unfortunately, at the Salt Lake City games, the only events I could get into were cross-country skiing and biathlon. Everything else was either sold out or too expensive. So alas, no cheering on the lugers at the finish line as I had hoped. But I was at the Olympics, trading pins with people from different countries, eating hot dogs for breakfast, lunch, and dinner and shivering cold through it all.

One day at the 2002 games, I decided to take a trip to downtown Salt Lake City to where they had tents set up with games and events and all sorts of fun. To my delight, I saw that they had a mini-luge track for all to try. You can probably imagine how popular it was with kids and adults alike. I waited almost two hours in line to give it a go. Finally, it was my turn.

I was waiting at the start. There was no ugly hooded spandex, no cameras, and no family and friends to share my excitement with, but I raced down that short track at super speeds like a true Olympian and won… first place! I did it! I won a gold medal… pin, courtesy of Coca Cola.

Well, dreams and reality don’t always match up exactly the way we hope sometimes and we can’t always get what we want. But the Rolling Stones were right when they said, “if you try sometimes, you just might find, you get what you need.” And boy oh boy did I need that pin! I am looking forward to winning something again in London…stay tuned!

Will another gold medal be in my future? Who knows, but I can’t wait to document my Olympic adventures using my brand spanking new iPad (that I bought especially for the games!) to tell my friends, family and all you readers about them. But there’s kind of a lockdown from the Olympic bigwigs. I still don’t know for sure how much or how I’ll be legally allowed to post from behind the lines in London. Worst case scenario, I’ll post all my stories after the games.

If you have any stories that you want me to cover or some Olympic news tips, then please send me a tweet at @gpace. Wish me luck and please stay tuned!!!