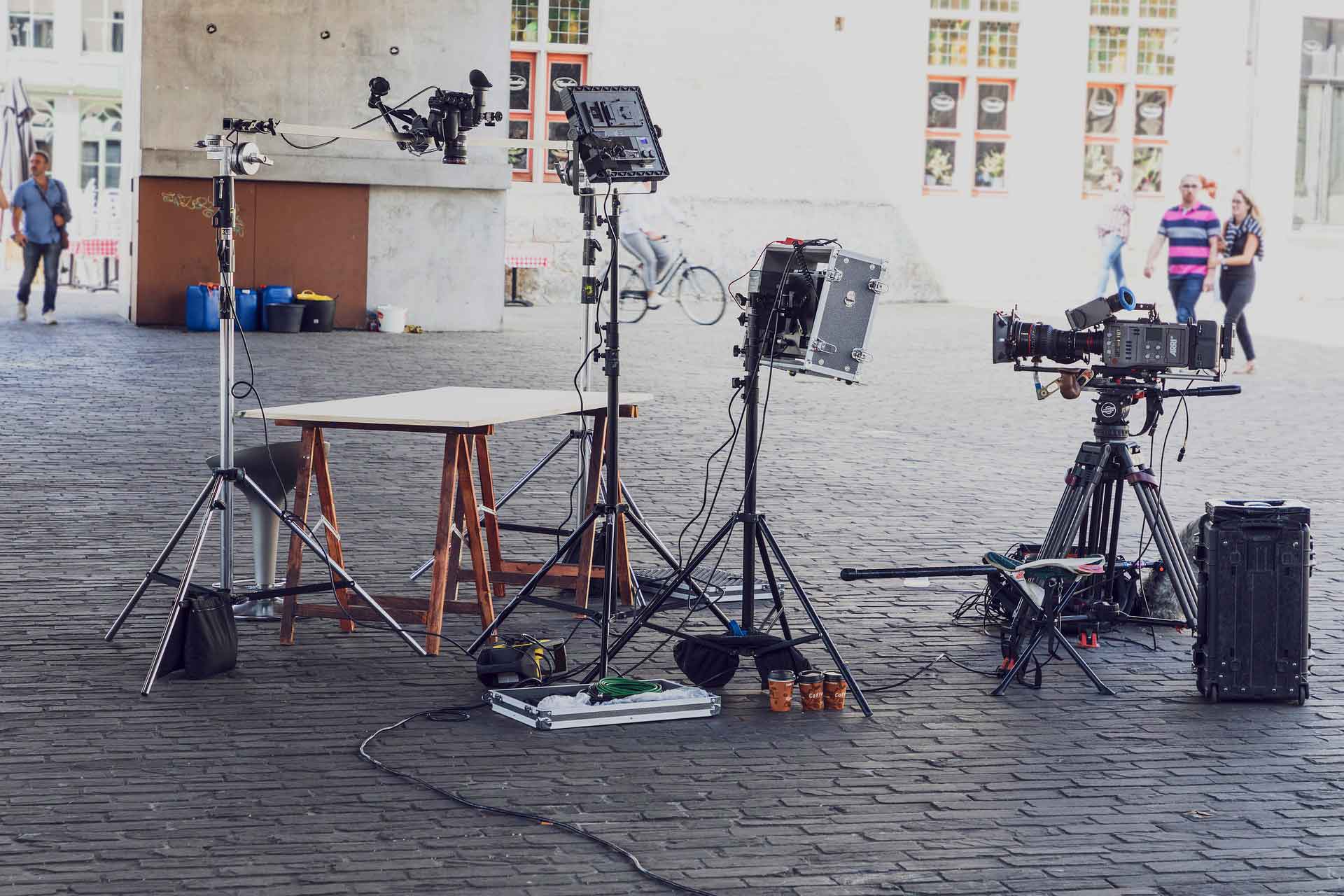 Are you planning a video production or photoshoot? Don’t forget to hang up a “Filming In Progress” sign and bring some model release forms with you. When recording imagery in a public location, people in the background might inadvertently be captured on camera. Even if you have permission to shoot in a public or private area, it’s a good idea to notify people in the area of your production. Crowd release signage at your event or shooting location can help alert participants that their likenesses may be captured on screen. Here are some general tips and both area-wide crowd release and model release form templates to use at your next photoshoot or video production.

NOTICE: Laws vary by location. The information in this article should not be considered legal advice. The author of this article is NOT a lawyer. Please consult a lawyer before your production.

Even if you’re actively trying to avoid it, someone may end up in one of your shots during a photoshoot or video production. Make sure you publicly display a #FilmingInProgress sign while #onlocation

Here’s a simple audience release form template that you can copy and paste into a text document. Feel free to customize this form for your production. It’s also a good idea to keep several printed blank versions of a filming in progress sign with your production gear. This way you can always fill them out with a marker while on location if necessary.

CONTENT PRODUCED BY ________________ (“THE PRODUCTION”) IS BEING RECORDED IN AND AROUND THESE PREMISES. ALL PERSONS ENTERING HERE CONSENT TO THE USE OF THEIR PHOTOGRAPH, VIDEO, IMAGE, VOICE AND LIKENESS IN THE PROGRAM, AND IN PROMOTION THEREFOR, IN ANY AND ALL MEDIA, THROUGHOUT THE UNIVERSE, IN PERPETUITY, WITHOUT REMUNERATION. DO NOT ENTER THESE PREMISES IF YOU DO NOT CONSENT TO THE USE OF YOUR PHOTOGRAPH, VIDEO, IMAGE, VOICE AND/OR LIKENESS IN THIS MANNER.

After you print your signs, make sure you post them in visible locations like doorways and entrances. You can also hang a few signs on an around your gear. The goal is to make sure people have an opportunity to bypass the area if they want to.

How To Document Your Area-Wide Crowd Release Signage

It’s also a good idea to document the presence of your area-wide crowd release signs. Have your photographer or videographer document several examples of your filming in progress sign and their relevant surroundings. Include subjects, landmarks, crew members and other background imagery that help prove where and when your signs were posted. Make sure you archive these shots with the rest of your footage.

Documenting your filming in progress sign is worth the extra effort and might be very valuable in the future if you ever find yourself in legal trouble. And just to be clear, the information in this article contains general best practices and should not be considered legal advice. I am not a lawyer. Please seek legal counsel before your production or if you have additional questions regarding the benefits of production signage and release forms.

Another option is to add a “Filming In Progress” notification to ticket stubs, Playbills or event programs. If the event that you are recording has any type of printed marketing collateral, plan ahead and add your crowd release notification to existing materials. For example, when there’s a last-minute casting change at a play or musical, event staff will often add a paper insert to the Playbill with the updated info.

In consideration of my engagement as a model, and for other good and valuable consideration herein acknowledged as received, I hereby grant the following rights and permissions to ______________________ (“THE PRODUCTION”), their heirs, legal representatives, and assigns, those for whom Photographer/Videographer is acting, and those acting with his/her authority and permission. They have the irrevocable, perpetual and unrestricted right and permission to take, use, re-use, publish, and republish photographic portraits, video or pictures of me or in which I may be included, in whole or in part, or composite or distorted in character or form, without restriction as to changes or alterations, in conjunction with my own or a fictitious name, or reproductions thereof in color or otherwise, made through any medium at his/her studios or elsewhere, and in any and all media now or hereafter known, specifically including but not limited to print media and distribution over television, the internet for illustration, promotion, art, editorial, advertising, trade, or any other purpose whatsoever.

I specifically consent to the digital compositing or distortion of the portraits or pictures, including without restriction any changes or alterations as to color, size, shape, perspective, context, foreground or background. I also consent to the use of any published matter in conjunction with such photographs/videos. I hereby waive any right that I may have to inspect or approve the finished product or products and the advertising copy or other matter that may be used in connection with them or the use to which they may be applied. I hereby release, discharge, and agree to hold harmless THE PRODUCTION, their Photographer/Videographer, their heirs, legal representatives, and assigns, and all persons acting under their permission or authority or those for whom they are acting, from any liability by virtue of any blurring, distortion, alteration, optical  illusion, or use in composite form, whether intentional or otherwise, that may occur or be produced in the taking of such photographs/videos or in any subsequent processing of them, as well as any publication of them, including without limitation any claims for libel or violation of any right of publicity or privacy.

I hereby warrant that I am of full age and have the right to contract in my own name. I have read the above authorization, release, and agreement, prior to its execution, and I am fully familiar with the contents of this document. This document shall be binding upon me and my heirs, legal representatives, and assigns.

What’s Probably Not Covered With A Wide Area Release Sign

Posting a filming in progress sign is a good idea. But that one piece of paper isn’t a golden out of jail free card. If you are exploiting someone for-profit or depicting them in a sensitive situation, then it will probably result in a legal issue. Please consult a lawyer before your production, but here are a couple of examples where an area-wide crowd release form is probably worthless.

When content creators produce a video shoot at a location open to the public, it’s inevitable that people in the background might be captured on camera. Ideally, you should get every member of the crowd to sign a model release form. But sometimes, this isn’t practicable. A common alternative is to post a filming in progress sign near your production location. This helps alert the public that they may be captured on screen and that by entering the venue, they are consenting to be recorded.

Being prepared with both a model release form and crowd release signage is a good production habit for both photographers and videographers. But these are just general tips. I’m not a lawyer. Please consult with a lawyer about the laws for your specific location.