There’s a legendary Caddyshack Dalai Lama quote by Bill Murray’s character in the hit 1980 film. But does the Dalai Lama even know about it? Fox News reporter decided to find out. If you haven’t already, you have to see the Dalai Lama’s cringe-worthy response for yourself.

One of the best quotes from Caddyshack is when Bill Murray‘s character, Carl Spackler, tells a story about the time he was the Dalai Lama‘s golf caddy. According to the famous Caddyshack quote, the Dalai Lama didn’t give him a tip but instead offered some spiritual guidance.

The Dalai Lama isn’t actually in the movie Caddyshack. We just get to hear about the fictional round of golf through Carl Spackler. Here’s the legendary Caddyshack Dalai Lama quote:

Carl Spackler: So I jump ship in Hong Kong and I make my way over to Tibet, and I get on as a looper at a course over in the Himalayas.
Angie D’Annunzio: A looper?
Carl Spackler: A looper, you know, a caddy, a looper, a jock. So, I tell them I’m a pro jock, and who do you think they give me? The Dalai Lama, himself. Twelfth son of the Lama. The flowing robes, the grace, bald… striking. So, I’m on the first tee with him. I give him the driver. He hauls off and whacks one – big hitter, the Lama – long, into a ten-thousand-foot crevasse, right at the base of this glacier. Do you know what the Lama says? Gunga galunga… gunga, gunga-lagunga. So we finish the eighteenth and he’s gonna stiff me. And I say, “Hey, Lama, hey, how about a little something, you know, for the effort, you know.” And he says, “Oh, uh, there won’t be any money, but when you die, on your deathbed, you will receive total consciousness.” So I got that goin’ for me, which is nice.

NERD NOTE: Caddyshack writer and director, Harold Ramis, passed away in 2014. President Obama recognized Ramis in a White House press release offering prayers and hope that he “received total consciousness“. It’s the first and only time that the film Caddyshack has been referenced in a statement from the White House.

So has the Dalai Lama seen Caddyshack? Nobody had enough guts to ask the spiritual leader until Fox News reporter Bret Baier.

As you can see in Bret Baier’s interview with the Dalai Lama, the Tibetan leader was completely caught off guard by his question. I think it’s safe to say that the Dalai Lama has not only never seen the movie Caddyshack, but he’s also never even heard of it before.

Getting a featured mention in one of the best comedy films of all time normally would be an incredible honor, but apparently not for everyone. Maybe someday the Tibetan leader will get a chance to hear the full Caddyshack Dalai Lama monologue for himself.

What Does Gunga Galunga Mean? 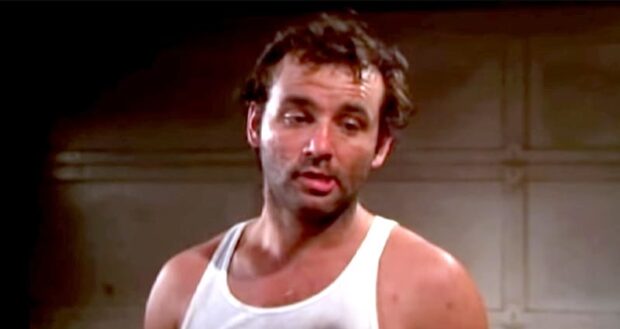 One of the first questions people normally have after hearing the Caddyshack Dalai Lama quote, is what does Gunga Galunga mean? In reality nothing. It’s just a made-up phrase from the movie Caddyshack. Gunga Galunga, sometimes pronounced Gunga Lagunga, is a fictional Tibetan expression used to peacefully express dismay after hitting an errant golf shot. Since the film’s release, it’s now common to hear someone say Gunga Lagunga while playing a bad game of golf.