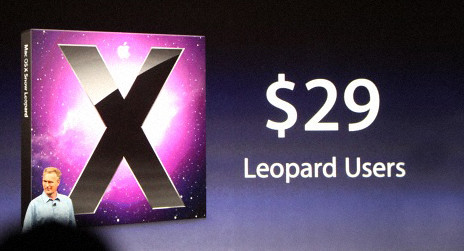 Looks like Apple is doing their part to help the struggling US economy… or at least give consumers a break. An upgrade to Apple’s next major operating system, called Snow Leopard, will only cost $29.

The announcement was made at the World Wide Developers Conference (WWDC) on Monday morning. Apple usually charges over $100 for their operating systems, but they are heavily discounting Snow Leopard to help encourage users to upgrade quickly. Apple’s discounted OS, slated for a September 2009 release, might also spark a price war with Redmond. Microsoft’s next OS, Windows 7, is slated for release a month after Snow Leopard. Microsoft hasn’t released any pricing information for Windows 7, but Microsoft’s operating systems typically cost ~$100.

Snow Leopard will be compatible with all Intel-based Macintosh computers and features an onslaught of new speed improvements. Several of the new speed and interface enhancements were demonstrated for the audience at WWDC.