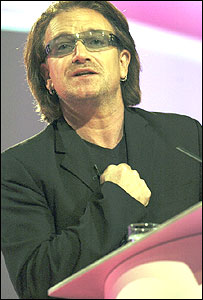 “As Apple tries to keep the iPod at the head of the digital music player pack, technology analyst Bill Thompson wonders whether they are playing fair.”

Music fans with a particular interest in the pomp-rock experimentation of U2 are salivating at the news that Bono and The Edge will be appearing with Apple’s Steve Jobs at a PR event in California on Tuesday.

The MethodShop Spin: People can criticize anyone (in this case Apple) all they want for what they are doing now and in the future. However, don’t even begin to talk about all of this open source crap! It’s Bull %*#@ to say that Apple is going about there front game in the digital music industry all wrong. Reason being that Microsoft and other competitors are doing the same thing just with more technologies. Examples include wider range of music source support on players and jukeboxes. Anyway, what I am saying is that all of this bolognie about Apple making another wrong turn in its endeavors like people claim they did with there Apple Mac’s initial introduction years ago, is crap! Competitors like Microsoft are the kings of proprietary! Microsoft and Sony have capitalized on this tactic for years and will continue to do so, in this industry and the many other revolving technical industries they have their hands on. Examples include Sony’s “memory card” used for some of their personal cameras in previous years, and Microsoft’s “WMA” file format.

Teaming with a solid band such as U2 is only a partnership to what both parties believe is for the good of the industry as a whole. This good obviously plays into both Apples and U2’s success as well, but without the industry pioneering in the manner Apple is directing, labels may loose profit margins, and artists may notice overall decrease in album success.

All in all, Apple is once again showing the world there is better technology out there and that they can handle this industry as well as others with ingenuity and character. Jealousy has definitely sunk in among the competition right above its idolization factor 😉