You are here: Home / Learn / Environment / Are artificial reefs good for the environment?

Are artificial reefs good for the environment?

Proponents say they replenish the ecosystem. Some scientists aren’t so sure.

It sounds like a great idea. Take a retired oil rig, Navy ship or fleet of subway cars that would otherwise add to our nation’s swelling heap of trash and drop it off the coast of just about anywhere. Plants and invertebrates will colonize the hulking structure. Fish will migrate there and reproduce. And before long, the replenished ecosystem will fuel an economic boon of recreational fishing and diving.

While the concept isn’t new, more artificial reefs are being lowered into the ocean now than ever before. Six hundred old subway cars off the coast of Maryland; 125,000 tons of volcanic rock into the ocean near Southern California, and a 524-foot vessel off the Florida Keys are among hundreds of projects slated for this year and next. But as artificial-reef initiatives grow to include more coastal regions and a wider array of aged infrastructure, some scientists worry that the commercial interests of fishing, diving and trash disposal are driving efforts that should be environmental. If that’s the case, they warn, thriving reefs may ultimately give way to an underwater junkyard. “Unfortunately it’s one of these things where people take a very superficial view–drop something in the water and a bunch of fish come and that’s wonderful,” says Jim Bohnsack, a fisheries biologist with the National Oceanic and Atmospheric Administration. “The reality is not so simple.” 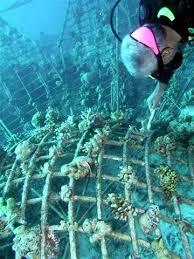 Fish ecologists refer to it as the attraction-production debate, and even proponents of artificial reefing admit it’s a tricky issue. Do man-made reefs replenish ecosystems that have been decimated by pollution, overfishing and global warming? Or do they merely lure existing populations away from natural habitats, concentrating them in unnatural ways and making them more vulnerable to overfishing? “In a lot of cases, that question has been answered,” says Bohnsack. “But proponents of reefing aren’t too happy with the answer, so they ignore it.” Research shows that artificial reefs only enhance fish populations when habitat is the limiting factor. In many cases, it isn’t. Overfishing is the bigger culprit, and because they are popular fishing locales, Bohnsack and his colleagues say, artificial reefs only make that problem worse.

Not everyone agrees. By designing reefs to attract transient species, like Black Sea bass, which flit in and out of the reefs, as opposed to species like grouper that prefer to stay in one place, and by implementing fishing restrictions, reef coordinators say they can guard against the overfishing of vulnerable species. “We believe the attraction-production issue is eminently manageable,” says Martin Gary, a fisheries ecologist with the Maryland Department of Natural Resources.

Facebook0Tweet0Pin0LinkedIn0
Category: Environment, Uncategorized
Previous Post: « How to Make Your Own Egg McMuffins at Home
Next Post: 50 Cent No Quiere Taco Bell »