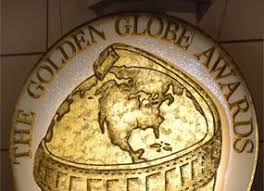 Two films that twist their genres, the period romance “Atonement” and Tim Burton’s adaptation of the murderous musical “Sweeney Todd,” were named the top movies of 2007 at the odd and quickly executed 65th annual Golden Globes “ceremony” Sunday.

“Atonement” and “Sweeney” were among four pics receiving two wins each. “No Country for Old Men” won the screenplay nod for Ethan and Joel Coen and supporting actor for Javier Bardem; “The Diving Bell and the Butterfly” won for director Julian Schnabel and foreign language film. “Atonement’s second win was for Dario Marianelli’s score.

Because the Hollywood Foreign Press Assn. was unable to make a deal with the striking Writers Guild of America, which would have allowed the Globes to be televised, the usual fanfare associated with the Globes was replaced by a news conference. Award winners were read by television entertainment journalists from the shows “The Insider,” CNN’s “Showbiz Tonight,” E!, “Extra,” “Inside Edition” and “Entertainment Tonight.” HFPA president Jorge Camara presented the final award of the night.

“Sweeney Todd: Demon Barber of Fleet Street” highlighted a musical mood of the evening: Johnny Depp won an acting trophy for portraying Todd; Cate Blanchett was named supporting actress for her portrayal of Bob Dylan in “I’m Not There”; and Marion Cotillard won the musical/comedy actress award for portraying Edith Piaf in “La Vie En Rose.”

Julie Christie, who had not been nominated for a Globe since 1975’s “Shampoo,” won her first for “Away From Her.” Daniel Day-Lewis, who had been nominated four times previously and not won, struck oil in the actor in a drama category for “There Will Be Blood.”

The Globes, determined by the 82-member Hollywood Foreign Press Assn., were handed out in 35 minutes at a press conference in the hotel’s International Ballroom with no celebrities or recipients on hand.

The journos continued to display their love for Great Britain and cable television, handing “Longford,” HBO’s U.K. co-production with Granada and Channel 4, three awards, including best miniseries or motion picture made for TV. AMC’s “Mad Men,” with only one season aired, won the TV drama nod while its star, Jon Hamm took the award for actor in a TV drama series. “Extras,” from the BBC and HBO, was named TV’s top comedy.

For the second year in a row, Disney/Pixar was served the animated film award, this time for “Ratatouille.”

“Charlie Wilson’s War,” which received five noms, and “Michael Clayton, which had four, were shut out.

HBO was the TV leader with six wins in the 11 TV categories. Among the film studios, Paramount Vantage and Miramax were involved with four winners each.