You are here: Home / Uncategorized / BBC launches iPlayer on the Wii

BBC launches iPlayer on the Wii 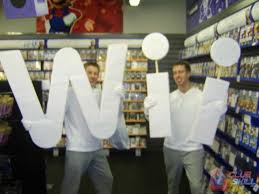 The BBC’s catch-up TV service, the iPlayer, is coming to regular sets for the first time thanks to a deal with Nintendo that demonstrates the industry’s determination to bring online viewing to television’s natural home – the living room.

The UK’s 2.4m owners of Nintendo Wii games consoles are now able to view popular BBC programmes such as The Apprentice and Eastenders “on demand” over the internet. The Wii is broadband enabled and plugs into a standard TV set.

As well as being the latest new platform for the iPlayer, alongside PCs and Apple’s iPhone, the partnership proves the potential of internet-enabled games consoles to bring online TV out of the bedroom and back into the heart of family life.

Sky subscribers can already download programmes to Sony’s Playstation Portable, a handheld device that incorporates a screen, while BT plans to supply Microsoft’s Xbox 360 console as a set-top box for its broadband TV service, BT Vision, later this year. But the BBC is the UK’s first broadcaster to use a games console to allow programmes to be shown in their natural medium.

“It was important for us to get the iPlayer into the living room,” said Erik Huggers, the BBC’s group controller for future media and technology. “The Wii offered a great way to do that.”

Games console manufacturers have been touting their capabilities as “media hubs” since the Xbox 360 launched in 2005. Xbox owners can send music and films from their Microsoft Windows PCs to the living room over wireless home networks, although these can be difficult to set up.

Microsoft sells films from certain Hollywood studios, such as Paramount’s blockbuster Transformers, for download to the Xbox, while Sony’s Playstation 3, the third-largest selling console in the UK last year, comes ready to play its high-definition Blu-Ray discs.

But the lower-powered Wii is estimated to have sold as many consoles last year in the UK as the Xbox and PS3 combined, thanks to the appeal of its motion-sensitive controller and family-friendly, multiplayer games.


In this instance the simplicity of the Wii has worked to its advantage. The Xbox and PS3 are able to connect to the internet but do not have a straightforward browser such as Opera on the Wii.

“This is a real win for Nintendo and definitely puts pressure on the Xbox 360 and PS3,” said Ian Maude of Enders Analysis. “Certainly [Sony and Microsoft] may need to look again at their strategies in regard to non-games content.”

Nonetheless, the BBC is taking a “platform-neutral” approach to iPlayer and hopes to put it on to more mobile phones and consoles. “We are talking to all the major players in the industry,” said Mr Huggers.

While it was easier to adapt the iPlayer for the Wii and iPhone, he suggested that commercial and technical barriers to its appearance on other platforms might be forced down by its popularity. “Audiences will win because other games console providers who may have more proprietary means of bringing video to consumers, such as their own video stores, might be pushed by the demand of their own audience to change those ways of working,” he added.

Peter Barrett, chief technology officer of Microsoft’s TV division, said services based on its Mediaroom platform, such as BT Vision, would offer advantages over standard broadcasters. “The big transition is to take advantage of a connected TV on a two-way network with social networking built into that experience.”

However, the BBC is catching up fast. The iPlayer will soon offer personalised recommendations based on viewing habits, and is working on a version of the iPlayer’s user interface for Virgin Media subscribers.