You are here: Home / Entertainment / Games / Is This The Best ‘Call of Duty: Black Ops’ Game Ever Played?

Is This The Best ‘Call of Duty: Black Ops’ Game Ever Played?

Get ready to watch one of the most epic matches of Call of Duty: Black Ops ever played. Just watch the screen capture and enjoy.

Get ready to watch one of the most epic matches of Call of Duty: Black Ops ever played. We don’t want to give away the final score. Just watch the video screen capture and enjoy.

The master gamer behind this epic feat is WhiteBoy7thSt. He has a YouTube channel where he posts screen captures of his matches. But when was the last time you saw a screen capture of a video game trending into the top 10 videos on YouTube? Seriously, that’s how epic this match is. It got over 700k views in under 48 hours and racked up another 250k video views over the weekend. Think about it for a moment. Over 1M people watched him play a video game? More people will watch this video today than your average primetime cable TV show. 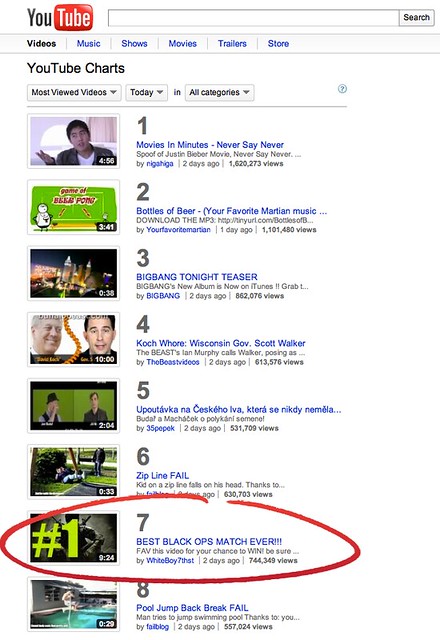 His gear for this match included: Akimbo Scorpions, Tomahawk, Decoy grenades and he kept his Kill Streaks low with Sentry Guns and Care Packages. You can follow @WhiteBoy7thSt on Twitter here.

Is This The Best #CallOfDuty Black Ops Game Ever Played? /via @Whiteboy7thst