Charles Darwin was one of the most important scientific minds of all time. But did you know that he also turned his formidable intellect to a less weighty question – do blondes have more fun? 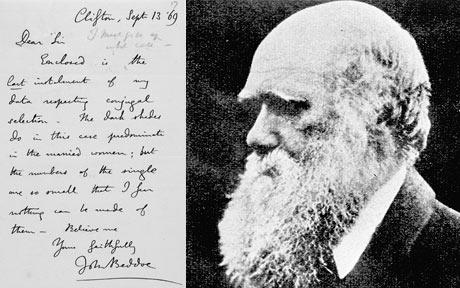 Letters uncovered as part of a major project to compile Darwin’s correspondence have revealed that the great Victorian naturalist devoted part of his time to examining whether hair colour affects a woman’s ability to find a mate.

He set out to investigate a theory that the prevalence of dark hair in the general population was increasing because brunettes were more likely to get married and have dark-haired offspring, while blondes tended to stay single and childless.

To further his research, he asked a doctor at Bristol Royal Infirmary to compile and send him data on the hair colour of married and single female patients at the hospital.

The investigation took place a decade after the publication of The Origin of Species, Darwin’s tome of 1859 which led to the theory of evolution.

Dr Alison Pearn, assistant director of the Darwin Correspondence Project at Cambridge University Library, said that Darwin seemed to treat the blonde question quite seriously, and had made extensive notes and calculations on the letters sent to him from the doctor.

She said: “Darwin was fascinated by questions of hair colour and the role it might play in choosing sexual partners. He was keen to test whether English blondes really were more likely to stay single, with a resulting decrease in blonde hair in subsequent generations.

“There are nine sets of calculations in which Darwin and his son George, who was about to take up a fellowship at Cambridge, combined and reanalysed the data.”