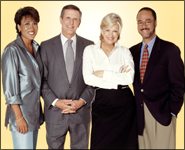 If he can bring any of his followers with him to “GMA,” it could help boost the audience for the ABC morning show, which ranks second to NBC’s “Today” show.