Every year on March 17, we honor Saint Patrick (circa 385–461), one of the patron saints of Ireland. Whether or not you choose to celebrate the holiday by wearing green, eating Irish foods, imbibing Irish drink (usually Guinness), or attending parades, we wish you a safe a happy holiday.

Every year on March 17, we honor Saint Patrick (circa 385–461), one of the patron saints of Ireland. Whether or not you choose to celebrate the holiday by wearing green, eating Irish foods, imbibing Irish drink (usually Guinness), or attending parades, we wish you a safe a happy holiday.

Macintosh Beer
Considered by many to be a “light” beer. All the cans look identical. When you take one from the fridge, it opens itself. The ingredients list is not on the can. If you call to ask about the ingredients, you are told that “you don’t need to know.” A notice on the side reminds you to drag your empties to the trashcan.

DOS Beer
Requires you to use your own can opener, and that you read the directions carefully before opening the can. The can is divided into eight compartments of 2oz each, which have to be accessed separately. A lot of people keep drinking it after it was discontinued.

Windows 3.1 Beer
Was the world’s most popular beer in the mid-1990s. Looked a lot like Mac Beer’s. Requires that you already own a DOS Beer. Claims that it allows you to drink several DOS Beers simultaneously, but in reality you can only drink a few of them, very slowly, especially slowly if you are drinking the Windows Beer at the same time. Sometimes, for no apparent reason, a can of Windows Beer will explode when you open it.

Windows NT Beer
Windows NT beer could only be purchased by the truckload. This caused most people to have to go out and buy bigger refrigerators. The can looked just like Windows 3.1 Beer. Touted as an “industrial strength” beer, and suggested only for use in bars.

Windows XP Beer
Tastes like Windows 2000 beer but comes with a pretty dress. It opens sometimes without asking and if you leave a case of it open for awhile, it might explode all over your basement. Oh best of all, sometimes Windows XP Beer likes to open your front door and let people in to hang advertisements all over your house and steal your credit card number.

UNIX Beer
This very heavy beer comes in 32oz cans, and has been around for years, rumor has it that it was originally brewed as a hoax by a couple of bored workers, only for them to find that some people actually liked the stuff. It tends to be drunk only by freaks or eccentric academics, often with beards; and drinkers of it do not like drinkers of any other beer. In its basic form it doesn’t look particularly impressive, but with the addition of a magic ingredient named “X”, it can be converted into an all-singing all-dancing beer on a par with the others. Many other varieties exist, with a huge range of flavors and (often unpronounceable) ingredients. Mac Beer has many of the same ingredients as Unix Beer.

OS/2 Beer
Tasted like a mix between Unix and DOS Beer. Allowed you to drink several DOS Beers and a Windows 3.1 Beer simultaneously, but slowly. You never saw anyone drinking OS/2 Beer, but the manufacturer (International Beer Manufacturing) claimed that 9 million OS/2 Beer 6-packs were sold. The best place these days to find a an OS/2 Beer is inside an old ATM machine.

Amiga Beer
The company went out of business, but their recipe was picked up by some weird German company, so now this beer is an import. This beer never really sold very well because the original manufacturer didn’t understand marketing. Like Unix Beer, Amiga Beer fans are an extremely loyal and loud group. When this can was originally introduced, it appeared flashy and colorful, but the design never changed much over the years, so it looked dated in its later years. 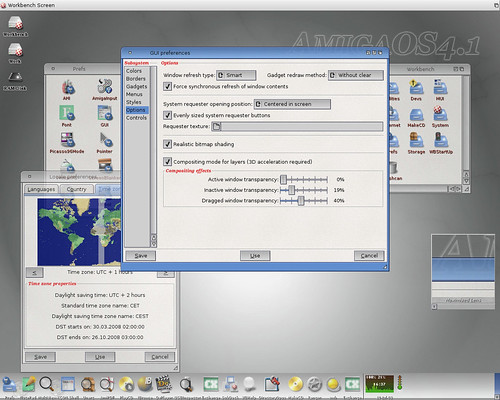 VMS Beer
Requires minimal user interaction, except for popping the top and sipping. However cans have been known on occasion to explode, or contain extremely un-beer-like contents. Best drunk in high pressure development environments. When you call the manufacturer for the list of ingredients, you’re told that is proprietary and referred to an unknown listing in the manuals published by the FDA. Rumors are that this was once listed in the Physicians’ Desk Reference as a tranquilizer, but no one can claim to have actually seen it.