Hellboy II comes out in theaters next Friday, July 11th and although I’ve heard a lot of buzz about it in our office, I’ll admit I wasn’t convinced why I should go see it since #1- I’m not a comic book fanatic and #2- I didn’t know a thing about Hellboy (plus his name – Hellboy- threw me off; I figured it was just another horror film). But then I was approached to do a write-up/interview in the newsletter so I figured it was a great opportunity to educate myself and learn what all this hype is about. 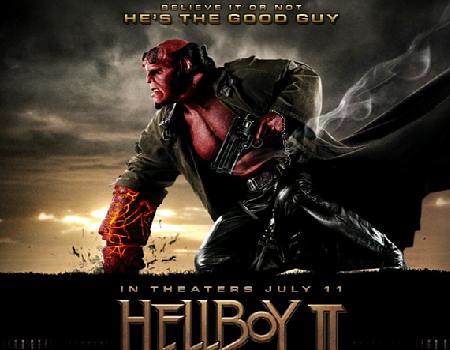 After doing a little research at hellboymovie.com (go there, it’s a really easy way to waste away 30 minutes) and stalking my coworkers (Chris Meador), I discovered that Hellboy is a good guy, he loves cats and candy, plus his world is brought to life by the incredibly creative Mexican director Guillermo del Toro. I have to admit my first instinct was totally and pleasantly wrong, and this film sounds really great. Check out my interview with David O’Connor, Senior Vice President of Strategic Marketing at Universal below:

M: Your team created a series of ads where Hellboy sits and chats with various NBC talent in character—like James Lipton from Bravo, the ghost hunters from Sci Fi, and Chuck from network. Why go with a cross-promotional campaign? 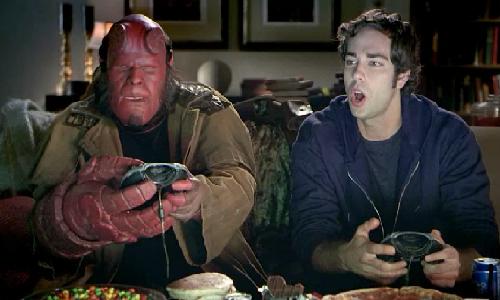 D: “With “Hellboy” there’s a built-in fanbase and with the cross-promotional ‘image’ campaign we wanted to expand this base. The first hurdle we had to get over was his name—Hellboy—and knowing that he’s a superhero we wanted to show another side to moms, families, boys, etc… we wanted to utilize the character and make him more than his name.”

M: Why is this partnership significant or necessary?
D: “Partnering with NBC means reaching a HUGE mainstream audience. This was a HUGE opportunity to reach out to not only promote the character, but also showcase all the NBC channels.” M: What’s Hellboy’s appeal beyond the comic book crowd?
D: “He has mainstream appeal more than anything. He’s an essential superhero fighting and working on behalf of humankind. He’s a guy we love so we knew he’d reach mainstream.”

M: Why are viewers going to relate to Hellboy even more this time around?
D: “This film has so much to offer. He’s an everyday guy, he eats candy, he drinks beer, he love cats, he has an average-joe sense of humor that we can all relate to, plus it’s all showcased in this fun expandable world Guillermo del Toro has created.”

M: The 1st Hellboy film was with Revolution and SONY so what led to Universal picking up the sequel?
D: “Revolution shut down at the end of their [five year] deal with Sony Pictures. When that happened the property became available and we took advantage of that. We also wanted to work with Guillermo del Toro. He’s incredibly talented and has great international appeal.”

M: Why open the film as a summer blockbuster?
D: “The 1st film was strictly based on a comic book. It was a small film that opened to a large base, and the numbers that followed up with DVD sales were incredible…there is a hard-core fanbase and working with del Toro who is a visionary filmmaker made us confident to open in the summer.”

M: As far as promotion what’s worked so far and what hasn’t?
D: “We had a lot of success back when ‘King Kong’ opened and we were the first studio to blow it out across the network. Since then others have followed but this time is even more exciting and unique because this campaign promotes the film AND the network’s shows. This is truly the first offering of its kind.”

M: Our newsletter audience is made up primarily of people in the TV industry versus film. What don’t they know about this movie that they should?
D: “We’re expanding the world of Hellboy and there’s so much to offer—the film delivers in scope, action, adventure, it’s perfect for a summer blockbuster. It covers everything in spades.” 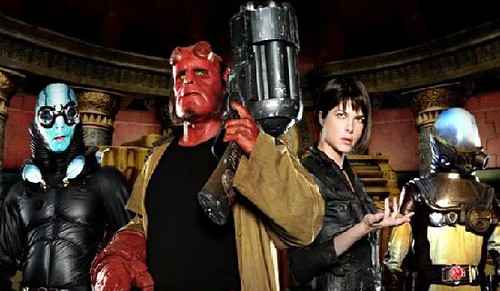