MSNBC's NewsBreaker Live is an interactive game that turns entire movie theater audiences into human joysticks as they move in unison in their seats.

Want a better pre-film experience at your movie theater? MSNBC created a fun interactive game that the entire movie theater can play at the same time. The experience is called NewsBreaker Live and it has entire theaters acting like “Human Joysticks”.

What Is NewsBreaker Live? 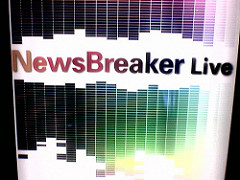 NewsBreaker Live is modeled after the classic video games like BrickBreaker, Breakout and Arkanoid. The game combines live msnbc.com RSS newsfeeds, the movement of the audience as a human joystick, and the movie screen as a game board. Groundbreaking motion-sensor technology dubbed “CrowdGaming” tracks the entire audience’s collective movement (watch video clip). Audience members control the game by moving in sync to smash up msnbc.com’s colorful brick spectrum of news with a bouncing ball and paddle.

Is This A Movie Theater First?

As far as I know, this is the first in-theater, audience participatory video game. And honestly, I think it’s pretty cool. Maybe slides of movie trivia and ads for local car dealerships will become a thing of the past. You can play an online version of NewsBreaker Live at newsbreakergame.com.