‘Immortal’ jellyfish swarming across the world

An ‘immortal’ jellyfish is swarming through the world’s oceans, according to scientists. 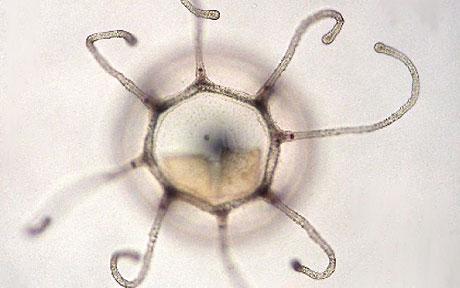 The Turritopsis Nutricula is able to revert back to a juvenile form once it mates after becoming sexually mature.

Marine biologists say the jellyfish numbers are rocketing because they need not die.

Dr Maria Miglietta of the Smithsonian Tropical Marine Institute said: “We are looking at a worldwide silent invasion.”

The jellyfish are originally from the Caribbean but have spready all over the world.

Turritopsis Nutricula is technically known as a hydrozoan and is the only known animal that is capable of reverting completely to its younger self.

It does this through the cell development process of transdifferentiation.

While most members of the jellyfish family usually die after propagating, the Turritopsis nutricula has developed the unique ability to return to a polyp state.

Having stumbled upon the font of eternal youth, this tiny creature which is just 5mm long is the focus of many intricate studies by marine biologists and geneticists to see exactly how it manages to literally reverse its aging process.