Inside information from Kevin Rose and iPhone patent application photos provide clues on what features will be in the iPhone.

Still wondering if all the iPhone rumors are true? There has been a trail of clues about the iPhone’s existence all over the Internet for over a year now. But many people still remain skeptical. Perhaps the discovery of the iPhone patent application and a recent quote from Kevin Rose will make the skeptics iPhone believers. 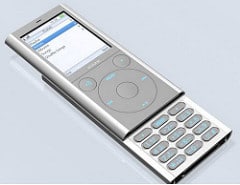 First things first… the iPhone patent pictures. If you go to this page on the US Patent & Trademark Office website, you will find a patent filed by Apple Computer for a “portable computing device capable of wireless communications.” The mystery device is also defined as a “cell phone” and “media player.” Apple filed for the patent on August 7th of this year.

Although the patent page doesn’t include any photos of the “iPhone,” I was able to find several credible looking patent pictures on MYiPhone.com.

Kevin Rose Has Inside Information From Apple

Now let’s talk about Kevin Rose. Apparently Mr. Rose, the mastermind behind the mega-popular website Digg.com, has his own “deep throat” informer at Apple HQ. This is what Rose had to say after a couple beers in his Diggnation video podcast.

“I don’t know if I should talk about this or not… I have a little bit of inside information on the Apple phone.”

Despite his initial reluctance, he did go on to talk about the iPhone. According to Rose, the iPhone will come in 4GB and 8GB versions and will feature a touchscreen and a slide-out keyboard. This seems to support the credibility of the patent images from MYiPhone.com. Rose also said the iPhone will be ‘carrier independent’ and support both GSM and CDMA phone standards. This means just about anyone can use an iPhone. To quote Borat, “Very nice..”

As you can probably tell, Rose was very forthcoming with iPhone details. But in my opinion, the coolest thing Rose said in his video podcast was about the iPhone battery. According to Rose, the iPhone will have two batteries – one for the MP3 player and one for the phone. Personally I’ve left my iPod on before and killed the battery. I absolutely wouldn’t want that to happen to my cell phone. The two battery system should prevent such an occurrence. Excellent idea and kudos to Apple for such a smart and useful feature.

The phone is to (supposedly) be released in January.