Is using an iPod bad for your health? Should Apple have to issue iPod health warnings?

Is using an iPod bad for you? An Australian private school is the first education institution that has officially banned iPods, for health reasons. According to Kerrie Murphy, the Principal at the International Grammar School, the iPod “encourages kids to be selfish and lonely.”

Is using an iPod bad for your health? Should Apple have to issue iPod health warnings?

Should Apple Be Required To Issue An iPod Health Warning Campaign?

When you buy things that are bad for you, like alcohol and cigarettes, those products have health warning labels. There are also government-funded public awareness efforts like this anti-smoking campaign from Brazil. Should Apple have to issue iPod heath warnings just like cigarette manufacturers? In response to the Australian school ban of the iPod, UK website, The Register, challenged their readers to create some sample iPod health warning labels. 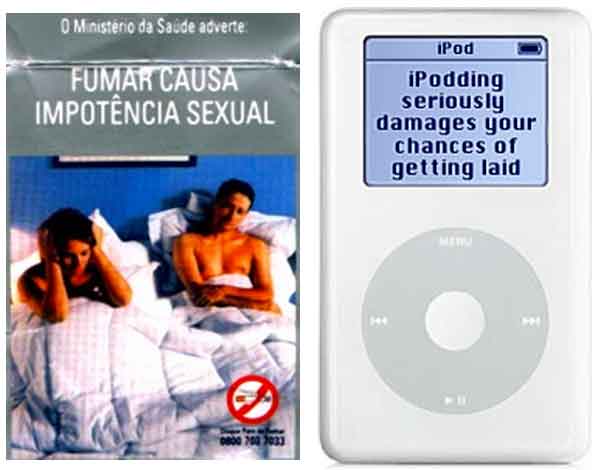 Is Listening To Music Socialily Alienating?

I don’t see how any music-related device can be socially alienating. Music has always been a social activity. Even cavemen were making music banging on rocks with sticks.

Blast forward to the twenty-first century and even one single iPod-listening kid is still participating in a social activity by listening to his iPod. That kid is finding out about new bands and recommending music to his friends. It’s all a complex social activity even though the act of listening to music with headphones might be done solitarily. But I’ve got some news for everyone, headphones have been around longer than the iPod!

The Popular My Butt Hurts Meme Now Has A Full Line Of Merchandise
Next Post:Neil Young’s Dead Man Adds Life to My iPod [review]