You are here: Home / Technology / Software / How Linux Was Announced To The World in 1991

How Linux Was Announced To The World in 1991

Did you ever wonder how Linux, the free open source operating system that powers most electronics and web servers, was first "announced"?

Have you ever used the Linux kernel or OS before? Even if you don’t currently have Linux installed on your home computer, chances are, something that you use on a daily basis, from the server that hosts your website to your television DVR, is powered by Linux. The open-source Linux operating system started a revolution in computing and is adored by software enthusiasts, power users, hackers and programmers everywhere.

Linux was created as a hobby by a Finnish computer science student named Linus Benedict Torvalds. But did you ever wonder how Linux was “announced”? Linus first told the world about his “hobby OS” on a Usenet posting on Aug 26, 1991, at 2:12 am.

I’m doing a (free) operating system (just a hobby, won’t be big and professional like gnu) for 386(486) AT clones. This has been brewing since april, and is starting to get ready. I’d like any feedback on
things people like/dislike in minix, as my OS resembles it somewhat (same physical layout of the file-system (due to practical reasons) among other things).

Amazingly, the old Usenet page is still online thanks to Google Groups. Here’s a screenshot. 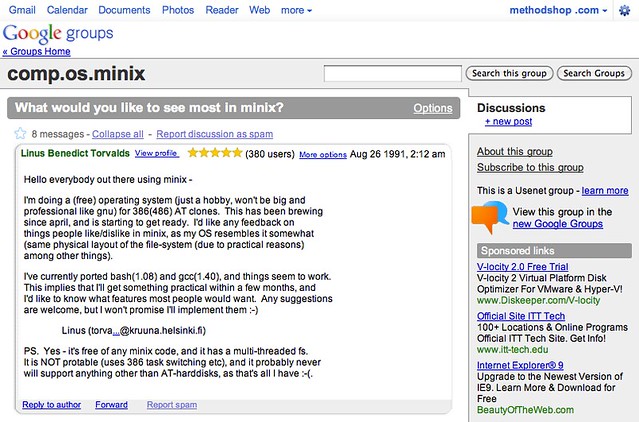 Let’s hope someone has preserved this post it in a museum and it doesn’t get trashed like this old ghetto Linux box.

One on One with Anvil’s Steve Kudlow (aka Lips)
Next Post: Blackhawk Tactical Pants with iPad Pocket »