Meredith Vieira Doesn’t Own an iPod

For the past couple weeks, NBC has been “tweeting” Olympic related messages via Twitter for NBC’s morning news program the Today Show (twitter.com/todayshow).

Everyday the Today Show “tweets” about everything from the weather in Beijing, to behind the scenes tidbits and how NBC’s employees are spending their days in China. But this morning we learned something new about co-host Meredith Vieira. You might want to sit down or brace yourself…. she doesn’t own an iPod (gasp!). 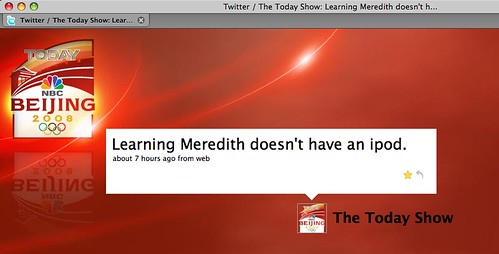 Why is her admission so weird to me? I can’t tell if it’s the fact that she doesn’t own an iPod or that she felt the need to confess it.