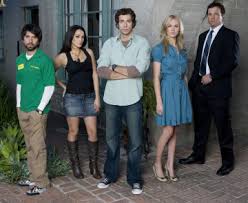 I want to take a moment this morning to congratulate NBC Entertainment on a fantastic Premiere Week.

NBC finished last week in a tie for first place in prime time, its best competitive finish in Premiere Week in four years. NBC and ABC tied, with a 3.9 rating among adults 18-49, for the first week of the season.

It’s a terrific start to the new season, filled with great highlights: Heroes and The Office both hit all-time series highs; The Office was the highest-rated comedy of the week; Bionic Woman was the highest-rated new show; all four new shows — Bionic Woman, Life, Chuck and Journeyman — got off to good starts; and Sunday Night Football, produced by NBC Sports, continued to shine. NBC finished first, outright, among adults 18-34, men 18-34, men 18-49 and men 25-54 for the entire week.

There is a long season ahead. There will be many ups and downs along the way, and much work still to be done at NBC Entertainment.

But this is a great start.

I want to offer my most sincere congratulations to Ben and Marc and the entire teams at NBC Entertainment and Universal Media Studios.

Fans Get To Pay Whatever They Want For New Radiohead In Rainbows Album
Next Post: 7 Underground Wonders of the World: Labyrinths, Crypts, Catacombs and More →